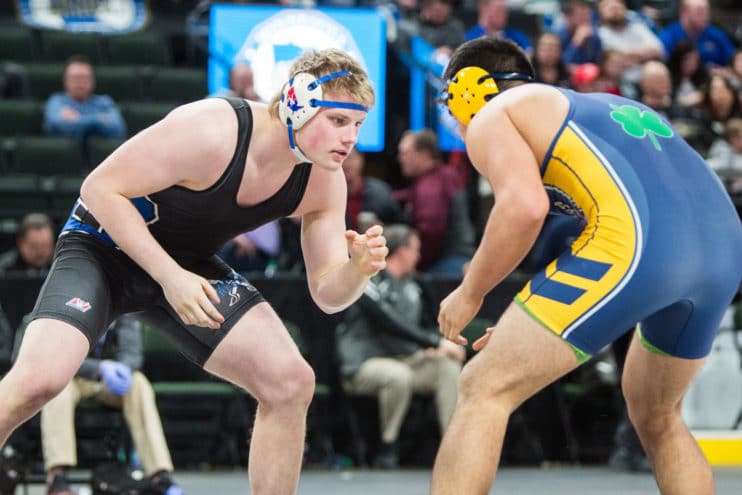 Two Sartell wrestlers competed in the Minnesota state wrestling tournament last weekend at the Xcel Energy Center in St. Paul. One, Jackson Penk, was eliminated early. The other, Cole Fibranz, came away with second place.

Fibranz, a senior, with a record of 45-3, is ranked No. 2 in the state at 220 pounds in Class 3A and ranked 14th overall nationally, according to InterMat. He made his way through the state bracket to the finals with three wins and a record of 45-2.

In the first round, he handily beat Charles Dressel from Mounds View by technical fall in 5:10, 16-1. Next, he dominated Nick Staska, Owatonna, 8-0. In the semi-finals, he beat John Noll, Centennial, 7-3.

The last match was not as close as the score indicated.

“I felt like I was in total control, the whole time,” Fibranz said.

Penk, also a senior, qualified for state with a stellar performance in the Section 8 tournament placing first at 132 pounds, with a record of 39-2, and a ranking of sixth in the state.

“Not a lot of people can shoot on him,” said Sabres coach Cory Olson commenting on Penk’s unusually low stance, and his ability to scramble. “So you don’t get to see that a lot, but it’s really fun to watch him get out of when it does happen.”

At state, Penk was eliminated from the tournament in an unexpected 11-9 first-round loss to Conner Higgins of Rochester John Marshall.

For the championship match at state, Fibranz wrestled Ezayah Oropeza, Rosemont, who is ranked 1st in the state and 11th nationally with a 45-0 record.

Fibranz fell behind early in the match and struggled to catch up for the remaining time.

The two had met at the beginning of this season with Oropeza coming out on top 2-1. So Fibranz knew what to expect and that he had to bring his best match in order to win.

A few hours after the loss, Fibranz was philosophical about it.

“If I have the energy to be mad, then I didn’t use enough on the mat,” he said. “I am content … I tried everything I could and it just didn’t work my way,” He said, that at least he could use the loss as a learning experience.

This was his third state tournament, at 220 pounds. Fibranz was a state champion two years ago as a sophomore. He placed third last year, losing in the semi-final to the same guy that he beat in the finals the year before.

He won the section tournament this year by beating another nemesis, Andrew Reigstad of Willmar, 5-1 in the finals. Reigstad is ranked third in the state and that is where he finished in the state tournament.

“I’ve had to wrestle him every single year,” Fibranz said with a hint of weariness. This year’s section tournament was the fifth time. Fibranz has beaten him all five.

As a team, the Sabres had a somewhat disappointing individual section tournament. They expected to have more guys qualify for state.

Senior Nick Pelach at 138 was having an outstanding year, was ranked fifth and had experience with his two state tournament wins last year. A late-season shoulder injury ended hopes of wrestling at sections and not just qualifying but placing at the state tournament.

The two lowest weights both had good seasons. Dylan Enriquez, a freshman at 106 was seeded first at sections with a 34-4 record. He finished 3rd. Andy Heckman, a junior at 113, was seeded 2nd, with a 23-9 record and placed 4th.

Freshman Ashton Lipinski at 126 wrestled well and placed 4th. Sam Fernholz, at 145 did likewise. He lost the third-place match, 3-2, and the chance to challenge for true second and a trip to the tournament.

Both sophomore Austin Frauenholt at 160 and junior Jack Engle at 182 placed fifth. 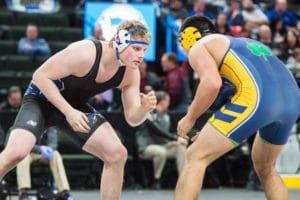 photo by Angie Heckman
Cole Fibranz lost to Ezayah Oropeza, Rosemount, who is ranked 1st in the state and 11th nationally, in the championship match. 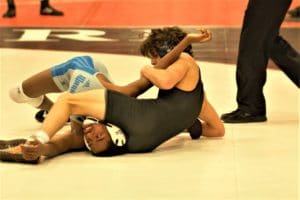 contributed photo
Jackson Penk, Sartell, puts the squeeze on Denny Busbey, Brainerd on his way to first-place at 132 pounds.

Diekmann grew up in Mounds View, Minnesota. He attended St. Cloud State University to wrestle and study English. He has been an infrequent freelance writer for several years, mostly for the Monitor-Review, a small paper that served the southern Minnesota town of Adams. He and his wife recently moved to Sauk Rapids to watch their grandchildren grow. He has been freelance writing for the Newsleaders since late 2015, and is still trying to get used to the novelty of having an editor.