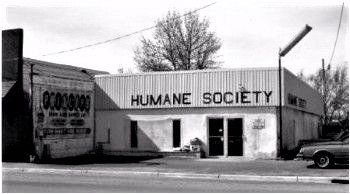 Its first home was a repurposed old gas station that sometimes flooded with rain. But now – nearly a half century later – the Tri-County Humane Society has just moved into its third home – a brand-new, state-of-the-art facility.

The old gas-station locale, on Lincoln Avenue in east St. Cloud, was just a stone’s throw to the west of the new building.

The new Tri-County Humane Society shelter’s open-for-business day will be Wednesday, Aug. 26. A public open house, perhaps a “virtual” one, will be announced later.

Humane society staff members and volunteers have been busy recently, moving stuff into the new building, which is just west of the current shelter at Eighth Street NE, St. Cloud. That building, the society’s second home, was built in 1989 and expanded and altered throughout the years until it was virtually bursting at the seams with overcrowded functions and activities.

Although the moving process is a happy one for staff excited about working in a custom-designed, spacious home, the process has also been bittersweet.

“We are leaving behind a building chock-full of memories for not only us but the community,” said TCHS Executive Director Vicki Davis, who has been with the nonprofit organization since 1984. “This shelter has served us well for the past 30 years, but we never imagined how we’d grow and how animal welfare – and this organization – would change during that time.”

“We kept the animals clean, fed and loved,” said Davis. “That’s about all we could do with the budget we had to work with.”

Davis compared the long evolution of the TCHS to a journey, quoting a Chinese proverb: “A journey of a thousand miles begins with a single step.”

The first step in the early mid-1970s was the efforts of volunteers to take care of animals in their homes. Then, in 1976, two years after the TCHS was formed, the old leaky gas station was another step. All it had was a dozen kennels, some puppy cages and a dozen cat cages. The next step on the journey, the second building, was like a dream come true. And now, this third, larger home is like an answered prayer; it’s the cat’s meow.

“We can now celebrate a milestone of many steps which have taken us from basic to better,” said Davis, “and now we step from better into a best-practice animal shelter.”

The new $4-million headquarters/shelter was created by HMA Architects and BCI Construction with partnership from Falcon National Bank. The facility contains twice the amount of space of the current – soon to be former – building. Ground was broken last fall for the structure.

So far, volunteers have raised about $2 million toward the $4-million cost of the facility. Fundraising efforts will continue to pay off the debt load.

Since its beginnings, with its measly annual $40,000 budget, the TCHS has grown by leaps and bounds every year and now has an annual budget of about $1 million. In its early years, the TCHS had a full-time staff of three people, five-part timers and 60 volunteers. Now there are 11 full-time staff, 21 part-time and up to 200 volunteers before the pandemic diminished that number due to exposure concerns. Last year, volunteers contributed 17,973 work hours – including caring for animals, walking dogs, office help and much more.

It is not unusual, said Davis, to house at any given time 150 animals, with more than 200 animals in foster-care homes.

The new building has spacious, airy rooms with plenty of natural light, and it even has a full veterinary suite. The sheltered animals should be much more comfortable and happier in the new spacious building as they wait for adoption.

“And the people – staff, volunteers, customers – will finally get a little breathing room and privacy,” Davis added.

Throughout the years, there has been a steady flurry of innovations and adaptations at the TCHS facility: a training building for dog-obedience classes and other educational endeavors; then, two years later, that building was turned into a surgery suite for spaying/neutering shelter animals; the start of a barn-cat program; education visits to schools; adoption programs at community venues; a one-stop cat adoption center in St. Cloud (also in a refurbished old gas station), and much more.

Last year, the TCHS adopted or found places for 3,668 animals, fostered out to volunteers 1,161 animals, spayed and neutered 2,214 and performed 2,350 surgeries.

Because of the virus pandemic, the TCHS – for the time being at least – schedules viewing of its animals and adoption processes by appointment only. Visitors who make appointments must wear masks at the shelter, as do staff and volunteers. To make an appointment, call 252-0896.

To donate, to volunteer or to view animals online that are up for adoption, visit the TCHS website at www.tricountyhumanesociety.org 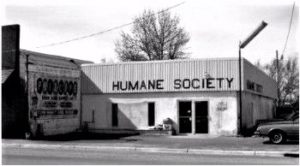 contributed photo
Close to a half century ago, this old remodeled gas station was the first “home” of the Tri-County Humane Society. It was located on Lincoln Avenue in east St. Cloud just a stone’s throw west of the TCHS’s brand-new shelter, which will open Aug. 26. 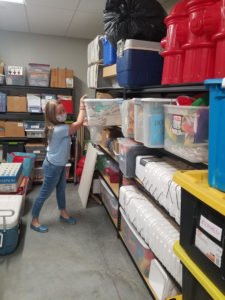 contributed photo
Angela Mundis, special-events coordinator, moves items into a storage room at the new facility of the Tri-County Humane Society. The new building is just to the west of the current “old” one, which opened in 1989 in east St. Cloud. The new building has twice the space of the former shelter.