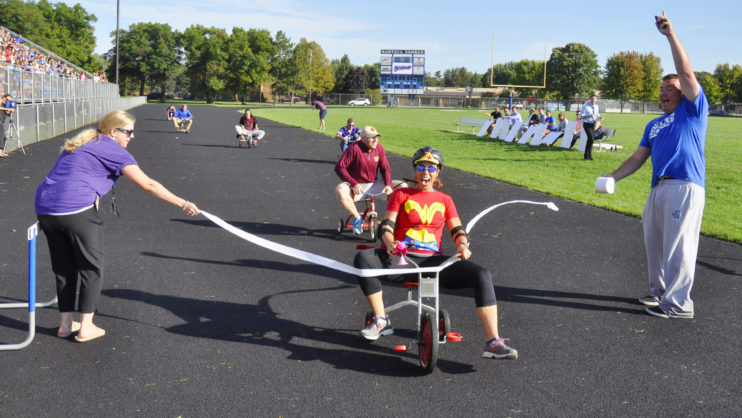 Riverview will be the name of Sartell-St. Stephen’s intermediate school when it opens next fall to serve students in grades three through five.

The name was revealed Monday, Sept. 16, at Sabre Stadium with games that slowly uncovered the letters spelling out the name.

Current second, third and fourth-graders gathered at the stadium for the games that included a tricycle race and dance contest. The class that won each contest could pick a card to flip over that eventually revealed letters spelling out the name in scrambled order.

Built in 1969, the newly renamed building was the district’s original junior/senior high school. At one point, it housed grades three-12. It has most recently been used as a middle school for grades five through eight.

Riverview was selected during a process that included suggestions from students and staff and voting that included the community. People suggested more than 50 names and more than 2,000 paper and online ballots were cast. School leaders kept the name a secret since May. The other two names were Mississippi Mills and Watab River.

During the event, all students donned blue Riverview T-shirts donated by St. Cloud Financial Credit Union for a group photo taken from a drone.

Zach Dingmann is one of the current assistant principals at Sartell Middle School and will be the principal at Riverview Intermediate School.

The intermediate school naming is part of the district’s larger strategic plan for building use. A new high school opened this month. When school starts next fall, pre-K through kindergarten students will be at Oak Ridge, students in grades one and two will attend Pine Meadow, grades three through five will attend Riverview and grades six through eight will attend middle school. 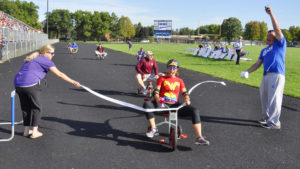 photo by Mike Knaak
Fifth-grade teacher Jennifer Olson wins a tricycle race that was part of the event revealing the name of Sartell’s intermediate school. 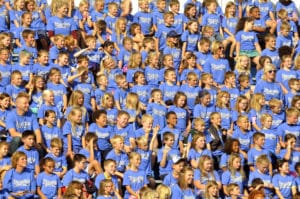 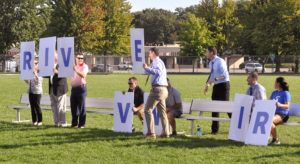 photo by Mike Knaak
A series of contests slowly revealed letters that spelled out RIVERVIEW in scrambled order.