During the anguished weeks after Jacob Wetterling’s abduction, the collective heart of an entire community beat for Jacob and his family.

But if the people of St. Joseph and Central Minnesota were immobilized by shock and grief, it was only for a stunned moment. “Jacob’s Hope” became the rally cry of thousands as the community rose up and embarked upon a remarkable tireless campaign of support.

Even veteran media people covering the Wetterling story were amazed at the community response.

“I’ve covered a lot of things,” said Scott Rapoport, field reporter for the nationally syndicated news show, Inside Edition, “but I’ve never seen anything quite like this.”

Support for Jacob and the Wetterlings has found expression in many forms. In the days immediately after his abduction, Jacob’s friends, neighbors, community members and students from the College of St. Benedict and St. John’s University held a vigil march. The message: such violence in our community cannot be tolerated.

Next followed the first of many prayer services. Within days, tens of thousands of posters bearing Jacob’s picture and description began circulation throughout the state and beyond, largely thanks to the efforts of volunteers who either faxed them out or posted them by hand. Ten thousand of these were distributed at a Northstars’ game by parents of Jacob’s hockey teammates.

The St. Cloud Youth Hockey Association established a $25,000 reward fund designed to encourage citizens to come forward with information leading to Jacob’s safe return. Donations poured in and thousands of tips were reported.

Radio stations across the state joined in an effort to convey a message of hope to Jacob by simultaneously playing his favorite song, Listen, by Red Grammer.

“We are the Children,” a rally for Jacob and for missing children everywhere, organized by Sts. Peter and Paul Middle School students, drew nearly 1,000 people to the Municipal Sports Center to share thought, song and prayer.

The next day, at a balloon rally at the St. Joseph Catholic Church, hundreds of white balloons bearing the words “Jacob’s Hope” were released into the air, carrying aloft a message of hope.

A benefit buffet and silent auction, held at the Del-Win Entertainment Center, raised $20,000 for the Jacob Wetterling reward fund.

Dozens of volunteers showed up to assist a massive poster mailing campaign organized by the San Francisco-based Kevin Collins Foundation. More than 35,000 fliers were mailed out nationwide the first evening.

Throughout the weeks after Jacob’s abduction, family, friends and neighbors never relaxed their efforts to provide help and comfort to the Wetterlings. Countless personal expressions of support have been a source of strength for the family during their long vigil.

“You can’t even list the ways people have been there to help,” said Jacob’s mother, Patty. “People being here, the hugs, the food, the flowers and plants, the individual efforts spreading posters around, the designing of the buttons and the bows, all this is truly astonishing.”

Stacks of letters, drawings and banners from school children all over the area have arrived, bringing poignant, heartfelt expressions of hope.

One special, young friend gave Patty his “hope medallion,” a good luck token which had seen him through some difficult times. This inspired gift, which hasn’t left Patty’s possession since the ordeal began, has been a special source of positive energy.

Dr David Baraga, clinical supervisor for the Central Minnesota Mental Health Center and a St. Joseph resident, spoke at the rally held for Jacob at the Municipal Sports Center.

“It’s impossible to make sense out of this senseless happening,” he said, “but if there is a meaning it would have to be the tremendous bonding of our community. And the result of that bonding is that, although he is away, Jacob’s spirit lives on in St. Joseph.”

When a community faces a crisis, fear and the feeling of helplessness often result in this sort of bonding. Still, the incredible sharing of love and support for the Wetterlings is greater than some psychologists and social workers might have predicted, according to Baraga.

“A number of professionals have said to me that even in similar kinds of situations, they haven’t seen that kind of support, and almost constant outpouring of hope,” he said.

Is it surprising that, in an age when people are saturated with graphic depictions of global violence, there has been such a loud cry of outrage and show of unity and support?

One explanation, according to Baraga, is the facts of Jacob’s abduction are so real and undeniable. The eyewitness reports of Jacob’s brother, Trevor, and friend Aaron Larson, both at the scene of the abduction, prevent any speculation about Jacob’s disappearance.

Another may be Jacob himself. According to his mother Patty, “One of the things that Jacob does best is make friends.”

Indeed, Jacob is very real to all of us. In his father Jerry’s words, “Jacob has become the symbol of everybody’s son.”

Perhaps our community has rallied to reaffirm the good in our small-town way of life.

“Jacob’s abduction is a symbol of a violation I’m glad to see people here are not willing to accept, despite all the violence in the world,” said Sue Williams, a St. Joseph resident.

For whatever reasons, the support offered by the community has been a lifeline for the Wetterlings. Every prayer, every gesture, every expression of hope has helped to sustain them.

“There is no life without hope,” said Patty quietly, in a tone that bespeaks her family’s conviction that Jacob will be home soon. “Because everyone’s working so hard I just have to believe the good will overpower the bad in this.”

St. Joseph, indeed all of Minnesota, is helping to keep this faith alive, reminded, perhaps, that in the words of Red Grammer, “we are all a part of the family of man.” 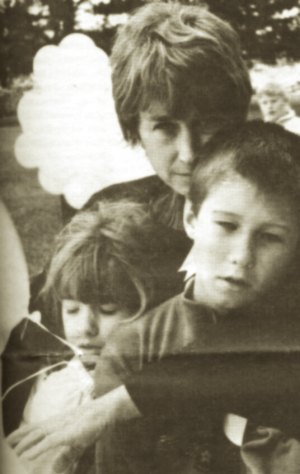 photo by Stuart Goldschen
Local residents strung together numerous “Jacob’s Hope” ribbons along County Road 51 in Collegeville Township. The white ribbons remind local citizens of the innocence of all children.

Santa Paws is coming to town