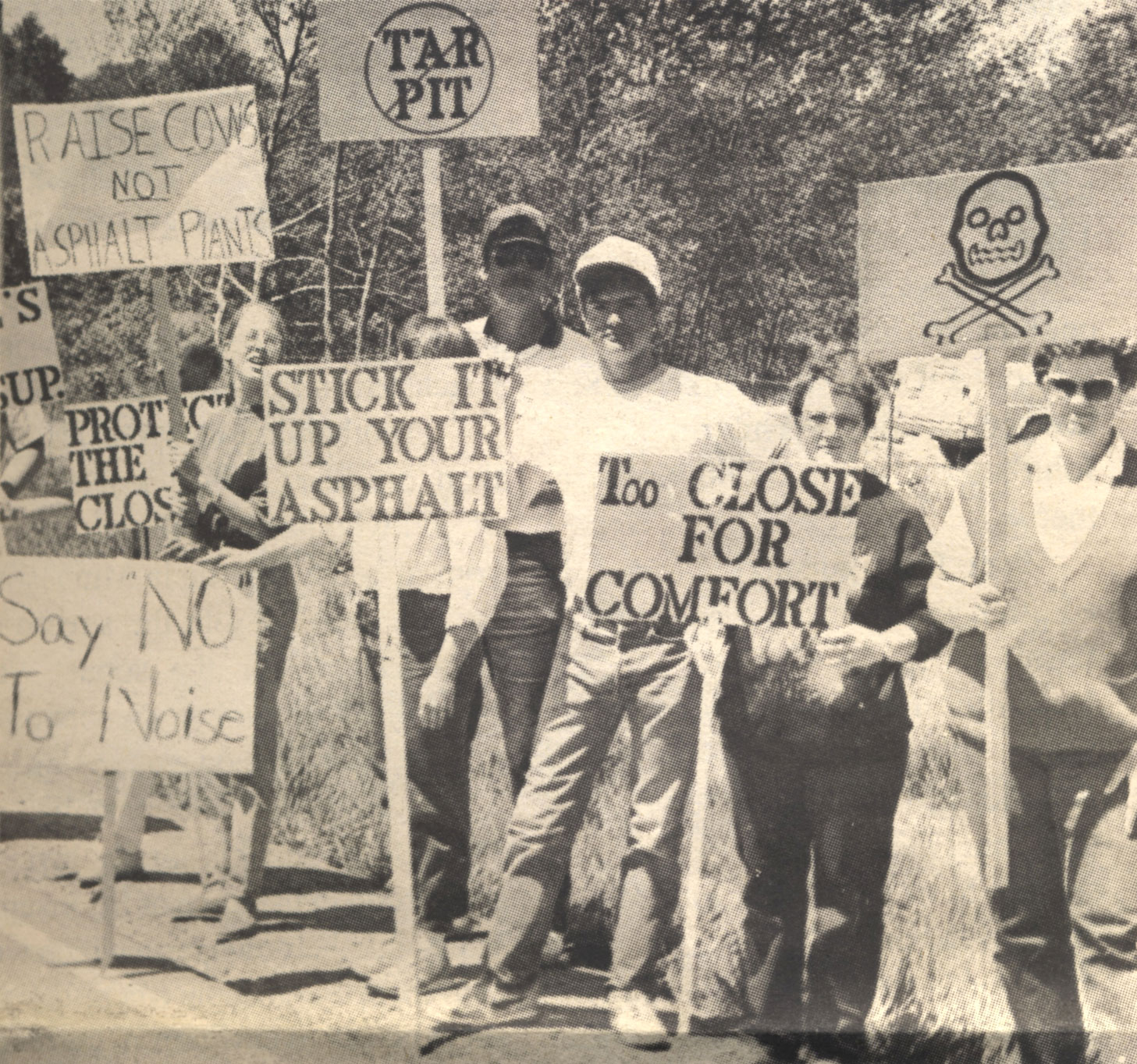 The peaceful, bucolic township of Collegeville has gone to war, and there’s little chance of peace before the end of June.

An angry, insistent group of township residents have taken to the streets to prevent the installation of an asphalt plant and the operation of a gravel-crushing facility in their midst. They fear an attack on their environment and a threat to their health and safety.

The residents’ declared enemy is Bauerly Bros. Inc., a Sauk Rapids gravel and asphalt company, that has already begun work at an existing Collegeville gravel pit. The pit is located on Stearns County Road 51 between St. John’s University and Big Watab Lake, about six miles west of St. Joseph.

Bauerly has leased the pit to do neighboring road work this summer for Stearns County. The firm began a controversial, 24-hour gravel-crushing operation there and is seeking a permit to construct an adjoining asphalt plant.

Peace attempts by the township’s board of supervisors have proved fruitless to date, and both sides continue to face each other in an entrenched stalemate.

Irate residents near the pit, first took up arms against Bauerly when the firm moved in to operate there during the week of May 22. Some 50 front-line opponents armed themselves with homemade posters and demonstrated in front of the site for two days during the Memorial Day weekend.

The latest salvos from both sides were fired May 30 during a public township board meeting. More than 100 people filled the hall’s seats and available standing room for a three-hour verbal scuffle.

When the smoke cleared, little had changed. But the residents did win a small victory through the board’s vote to limit Bauerly’s gravel-crushing operation to the hours between 6 a.m. and 10 p.m., five days a week.

Unable, however, to score a fatal blow that evening, both sides retreated unhappily to regroup for another encounter.

The board’s planning commission, which tabled the matter last month for 30 days, will try again to end hostilities at its June 20 meeting. The commission will review new environmental study data, including aerial photos and topographical maps of the pit site submitted by Bauerly Bros., and make a recommendation to the township board.

The board, meanwhile, wants to confer with its attorney, Kirby Dahl of Cold Spring, who was on vacation at the inception of the battle. The board hopes to present a peace treaty at its next meeting on June 27.

At the May 30 meeting, both sides fired continuous rounds of facts and feelings, but opponents of the plant far outnumbered Bauerly Bros. and its township allies. The majority army brought their attorney, Denis Hynes of St. Cloud, and submitted a petition against the plant signed by 250 persons.

Opponents claim a 1979 township ordinance prohibits operations like Bauerly’s gravel-crushing pit. They further contend Bauerly’s effort to receive a conditional-use permit to operate an asphalt plant there for 21-and-a-half working days is a “foot-in-the-door approach for further similar permits.”

“There’s some question in my mind whether what is happening now is permissible under your ordinance,” Hynes told the board. “The ordinance allows for a small gravel pit. It doesn’t permit enlargement or expansion. What’s happening out here, from all appearances to me, is strip mining.”

Bauerly Bros. secretary Mark Bauerly, who supervises the pit site, said the ordinance’s grandfather clause permitted the gravel-crushing work his company is doing because it is not unlike work done there before the ordinance was passed. He said he feels his application for an asphalt plant should be approved because the plant would be temporary and have a minimal impact on residents and the environment.

“If the operation were outside the township, there would be an increase in damage and exposure to traffic,” Bauerly said. “We can avoid traffic and safety problems by being as close to our projects as possible.”

Watching both sides thrust and parry, the township board struggled for an answer to the strife. Board members feared legal repercussions, however, should they terminate the war then and there, before consulting their attorney.

“There’s lots of legal work to do,” said Eldred Ruegemer, a township board member. “It doesn’t look like we’re going to settle anything quickly. It may be months – or a year – before we decide what to do here.”

The war, meanwhile, goes on.

photo by Stuart Goldschen
Bauerly Bros. secretary Mark Bauerly defends his company’s position in Collegeville “war” before packed house at the township’s board of supervisors meeting May 30.