Sartell Boy Scout Anthony Berndt, 15, who will receive his Eagle Scout badge this fall, was thanked by the Sartell City Council for all of his work installing benches at Sauk River Regional Park.

At the July City Council meeting, Berndt outlined the work he did for his bench project.

The bench project was his community project, which is one of the criteria for earning the Eagle Scout honor. After talking with city staff, Berndt decided that placing three swing benches in that park would be a good idea. He then began the long process of fundraising and enlisting help. Many other scouts in Berndt’s Sartell Troop 211 joined to work on the installation of benches, as did Berndt’s family members. First, concrete bases were poured. After the concrete cured for a week, the benches were installed at the end of June. One is at the trailhead of the park. The other two are about 20 feet apart along the trail, close to the Sauk River.

The entire project cost about $2,000. The benches are made of light-brown polywood, a hard plastic that resembles wood, which makes them virtually maintenance-free.

Each bench, which cost $600 each, was sponsored by the following: the Sartell-St. Stephen chapter of the Knights of Columbus, Medical Arts Dental and members of Berndt’s extended family.

Other funds needed for supplies, such as concrete, were provided by Pediatric Dentistry, BankVista and Walmart.

Berndt is the son of Jodi and Jodi Berndt of Sartell. He has three siblings – Ethan, Emily and Andrew. 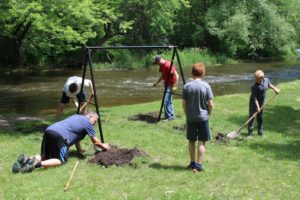 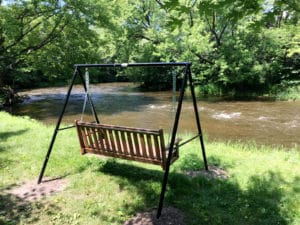 contributed photo
This is one of three swing benches installed at Sauk River Regional Park, thanks to the fundraising and hard work of Sartell Boy Scout Anthony Berndt, fellow scouts and extended-family members.