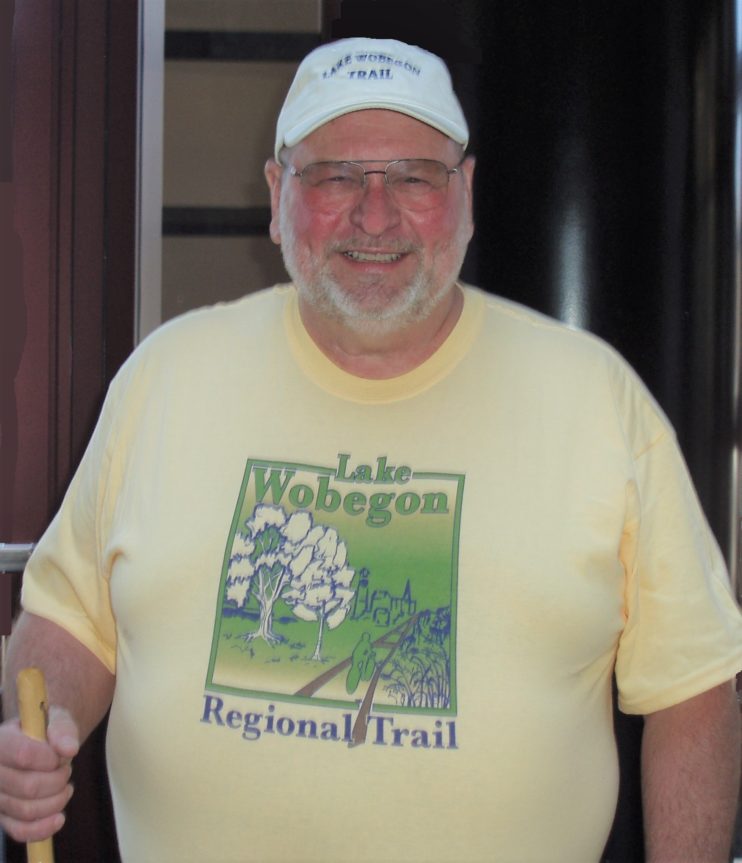 Little did Cliff Borgerding realize in the 1970s that a railroad bed one-half mile from his home in Avon would someday become a bicycle trail he would come to know and love.

At that time, Borgerding worked for the Fingerhut company in St. Cloud, with lots of employees that commuted from cities to the west: Sauk Centre, Freeport, Albany and so on. He always had a wish the a shuttle railroad could be started on the Burlington Northern railroad bed so commuters could use it. But it was not to be. Instead, in 1994 the Albany Jaycees suggested turning the railroad bed into a biking-hiking trail. After negotiations with Burlington Northern and many other entities, work on the trail began in fits and starts, inching eastward. By 2003, the trail extended, finally, from Albany north to Holding and from Sauk Centre to St. Joseph. In 2018, the long-awaited extension from St. Joseph to Waite Park was completed.

The Lake Wobegon Trail, as it was dubbed, was named after a gently satirical novel (“Lake Wobegon Days”) about Central Minnesota cities and people written by famed humorist and radio personality Garrison Keillor, who lived many years ago in Central Minnesota, including Freeport.

Years ago, Borgerding gradually realized what a great resource the recreational trail was for Central Minnesota: connecting cities along the trail; people enjoying the trail while getting to know one another; an economic boost for the cities and businesses along the way; a ideal scenic trail for theme bike rides, walks and fundraisers.

Borgerding is a past president for eight years of the Lake Wobegon Trails Association, a board member, bike-ride director and longtime promoter of the trail. Borgerding was organizer of the Caramel Roll (bike) Ride for 15 years and started the Lady Slipper Nature Ride and the Caramel Apple Ride eight years ago.

“Obviously, I had a lot of volunteer help (throughout) the years to make the rides and the trail so successful,” he said. “But now I’m running out of energy, hence the need for help.”

Borgerding and other trail supporters have started holding “Friends of the Lake Wobegon Trails” meetings in cities along the trail, including a recent one at the Bad Habit Brewing Co. in St. Joseph. The purpose of the meetings is to enlist support for the trail network in a variety of ways: financial contributions, hands-on trail maintenance, organizing efforts, serving on the Trails Board and outreach promotions to get schools, health organizations and others to use the trails on a regular basis.

“We would like to have a minimum of seven to nine board members,” Borgerding said. “Right now we only have four members. The goal of the LWTA (Lake Wobegon Trail Association) is to promote the trails and the communities along the trails, the businesses on the trails and to bring more visitors to our communities to add to our local economies.”

Current board members are Borgerding of Avon, Joe Christensen of Holdingford, Lucy Thomas from St. Cloud and Alison Dudek of Albany.

Another good reason to join the Friends of the Lake Wobegon Trails” organization is to do volunteer work with other groups so more trail connections can be realized – connections to the Central Lakes Trail, the Soo Line Trail, the Beaver Islands Trail, the Rocori Trail and the Glacial Lakes Trail. That network of connective and near-connective trails in Central Minnesota has become widely known and praised as one of the finest, most scenic trail networks in the nation.

“We need more people to step up and help us continue the work of the association,” Borgerding said. “We have too few people on the board to effectively do what needs to be done. It’s not that difficult or challenging to do, but we just need more bodies to help spread the workload.”

Other volunteer duties include organizing ride events such as printing posters, activating online registrations, doing mailings about ride details and lining up volunteers for the events.

The LWTA frequently works with other organizations to expand and maintain the network of trails.

“We work with groups such as the Camp Ripley Veterans Trail to help get their trail completed,” Borgerding said. “Completion of that one will connect the Paul Bunyan Trail to the Soo Line Trail, which is connected to the Lake Wobegon Trail. We also work to support other trail efforts, including the City of St. Cloud to complete their leg of the Wobegon Trail from Apollo High School to Hester Park at the Mississippi River.”

Borgerding said people who belong to Friends of the Trails Association will receive benefits, including discounts on ride events and LWTA merchandise, as well as a logo to attach to a bike, car or place of business.

And, not to forget, he added, the “Friends” will have so much fun along with any benefits.

“We hope to create activities with special benefits for our “Friends” to make the experience even more fun,” he said. “These events would be a way to bring trail users together. Examples would be casual spontaneous rides with a social activity afterward. Maybe a visit to a local brew pub (Bad Habit, Pan Town, Beaver Island, etc.) cidery (Milk & Honey Cider) or winery (Millner Heritage, Carlos Creek) to just enjoy the benefits of a social gathering. It could include a visit to a special place on the trail like a great restaurant (Fisher’s Club), ice-cream shop (e.g. Oak Station in Freeport), or visit Lake Wobegon sites made famous by Garrison Keillor.”

To find out more about the LWTA and the “Friends” organization, visit the website at lakewobegontrail.com. People may also call Borgerding at 320-293-9364 or email him at clifflwtrail@gmail.com.

contributed photo
Cliff Borgerding of Avon is a long-time booster of the Lake Wobegon Trail system. In the photo he is holding one of the many walking sticks he has carved, earning him the nickname “Stick Man.”

contributed photo
A bike approaches the old-fashioned scenic covered bridge on the Lake Wobegon Trail on its northern connection to Holdingford. 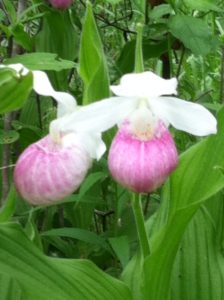 contributed photo
The Minnesota State Flower, the Lady Slipper, is often seen by walkers and riders on the Lake Wobegon Trail system.