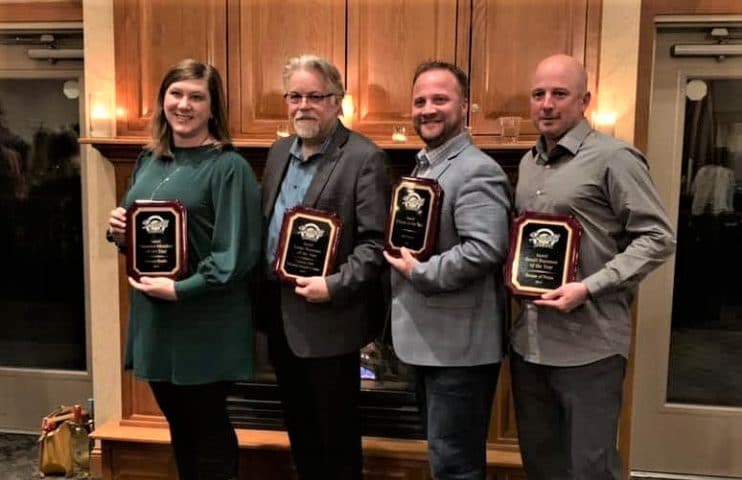 “We were thrilled,” said Lee of the award. “Just this year we are recognizing our 60th year. I often say we are greater St. Cloud’s best-kept secret. And for Sartell to call us out (for recognition) makes us so proud.”

Founded in 1959, the CMMHC now has numerous locations: three in St. Cloud and one each in Buffalo, Elk River, Monticello and Waite Park. Its main location in St. Cloud is  at 1321 13th St. N.

The center’s services are available for people in a four-county area (Benton, Stearns, Sherburne, Wright). Among those services are a mobile crisis-response team for children and/or adults in need of immediate mental-health services; a St. Cloud five-bed residential adult-crisis stabilization unit, which is a short-term and safe place for individuals to stay while working through a mental-health crisis; a suicide-prevention education program; and a St. Cloud-area response-initiative program, which is a coordinated community response for children (birth to age 18) and families that have experienced trauma or violence.

The center’s staff works diligently to ensure its programs are collaborative in nature, networking with entities in the area, such as law enforcement, to consider all factors in treating those suffering from mental-health issues.

Lee came on board as executive director in February 2016. Raised in the Twin Cities, Lee earned a degree in psychology at the University of WisconsinRiver Falls and then went onto receive master’s and doctoral degrees in clinical psychology at Bowling Green State University (Ohio). Throughout his career, he has provided clinical services in a variety of settings. Lee accepted the Choice award on behalf of the center and its staff at the Sartell Chamber banquet.

A “great staff” is what has made House of Pizza a successful business for so many years, said its owner Brandon Testa, who accepted the award at the Chamber banquet.

In a later interview, Testa again emphasized his great staff and excellent support from the community and from others in Sartell who own restaurants and who are mutually supportive rather than merely competitive.

“It felt good to get that award,” he said, “but it was an honor among such a good class of other businesses.”

Testa’s father, Bob, opened House of Pizza on Fifth Avenue in downtown St. Cloud in 1964. Later, Brandon bought the business from his father and opened the Sartell location in 2001. Up to 120 staff, mostly part-time people, work for House of Pizza, including many high-school and college students, Testa noted.

The multiple-award-winning House of Pizza relies on time-tested older recipes, but it also features new menu items introduced and fine-tuned throughout the years. Among its offerings are – besides pizza with dozens of styles and toppings – cheese breads, lots of pasta dishes, Italian waffle fries, Idaho house nachos, toasted ravioli, a wide variety of flatbreads, and many kinds of sandwiches, salads and refreshments.

“We have five watchwords for the business,” Testa said. “quality, consistency, cleanliness, customer service, community. And it’s our great staff that makes those watchwords happen.”

Testa, who lives in Sartell, is dedicated – along with his staff – to giving back to the community and good causes, and the restaurant often features fundraisers and other events to support local groups.

The two House of Pizza locations are at 1733 Pinecone Road S. in Sartell and at 19 Fifth Ave. S. in St. Cloud.

Sartell Citizen of the Year Jed A. Meyer has long been a tireless volunteer in the St. Cloud area and in Sartell, especially in regard to the Sartell Baseball Association and the development of the city’s Pinecone Central Park. Meyer currently serves as secretary of the baseball association and serves as a volunteer baseball coach. He formerly served the association as president and treasurer.

Meyer is the president and chief executive officer of the St. Cloud Financial Credit Union of Minnesota, which has a branch in Sartell, as well as ones in St. Cloud and Sauk Rapids led by Meyer. Meyer has been a leader in the financial-services business for nearly 25 years. That credit union now has nearly 18,500 members in Minnesota.

Meyer earned degrees in psychology and communications management from the University of Minnesota – Duluth.

Among his many memberships and volunteer work are the following: Sartell Pinecone Central Park Association; Sartell Baseball Association; and the Downtown St. Cloud Rotary (and previous treasurer). He also served on the Minnesota Youth Intervention Program, the St. Cloud Public Safety Foundation and the Plymouth/New Hope Little League as vice president.

Jessica Houle was honored as the Sartell Chamber of Commerce Member of the Year award for her multi-talented work for the Chamber and for the community at large.

Houle is vice president of development and community engagement for United Way of Central Minnesota, a job she began in January 2019. Before being named vice president, Houle was director of the UW’s workplace campaign from 2012 to 2018. Her past jobs included catering sales manager for Holiday Inn & Suites and reservationist for Madden’s Resort.

She has long been active in the Chamber, as its president in 2015 and through her many activities as a member of the Chamber Board.

Houle has long distinguished herself for her effectiveness in event planning and management, customer service, marketing, advertising, sales, program development, time management, training, community outreach, fundraising and networking. Those skills and other talents relating to business and community involvement earned her the “Choice” award for Chamber Member of the Year.

Houle is one of 12 Chamber Board members. 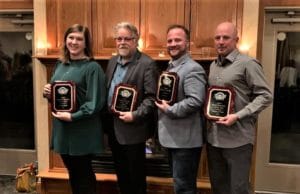 contributed photo
The Sartell Chamber of Commerce “Choice” winners, announced Nov. 14 at Blackberry Ridge Golf Course, are (left to right) Jessica Houle, Chamber Member of the Year; Dr. Richard Lee, who accepted on behalf of Large Business of the Year Central Minnesota Health Center; Sartell Citizen of the Year Jed A. Meyer; and Brandon Testa, owner of Small Business of the Year House of Pizza.