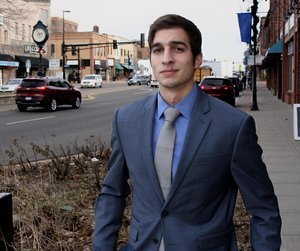 Benjamin Carollo of Sauk Rapids, who is challenging Rep. Tim O’Driscoll (R-Sartell) for the District 13B House seat, is fascinated by “the intersection of people and technology, how they impact each other and what problems arise as we advance as a society and a planet.”

He also said he strongly believes in these difficult and contentious times, Minnesotans must recommit to neighborly values and kindness.

Carollo, 26, spent four years on active duty in the U.S. Air Force as a geopolitical-intelligence analyst. He worked on many missions around the world and received personal thanks for the work he’d done from the Supreme Allied Commander of Europe. While on active duty, he completed an associate degree in intelligence studies and technology, as well as a bachelor’s degree in biosecurity and biodefense.

Since that time, he has been serving in the Air National Guard as a cybersecurity specialist. In the political sphere, he has managed the political campaigns of DFL candidate Ian Todd in the 2018 election and that of Michelle Lee in a special election. Carollo is now ready to earn a master’s degree in biosecurity and biodefense.

Carollo commented on the following issues for the Newsleader newspaper:

Working people, he said, lack real pathways to self-determination because the political system fails to respond to the needs of workers and thus many are stuck in workplaces that lack benefits and personal autonomy.

He said due to the “immense struggle to assure personal survival,” many workers do not have adequate meaningful and essential time with family and friends or the option to pursue fully their own interests. Without a real voice of representation, workers are marginalized, he added.

“We must restore to them real representation in the Legislature and real improvements in their conditions of living, such that working people have a substantial voice in their political system and the means by which they can carve their own path to success in the economic sphere,” he said. “Until every Minnesotan knows they have the freedom to enjoy the company of their family with adequate leisure time, free from the fear of hunger or eviction, we will not have achieved our goal of true freedom for working people in our state.”

Carollo said he learned in the military a process of “shredding,” in which jobs are broken down into segments of expertise. It could, he believes, be adapted to policing so responders/specialists are better equipped to handle varying situations, such as domestic crises, traffic incidents or violent crimes. Public safety, he said, requires a broad variety of strategies that include de-escalation and rehabilitation.

Also needed, he added, is a permanent statewide commission to review all civilian complaints against law enforcement so there will be an independent review of police tactics and procedures. The commission would also assess records of departments and officers for patterns of racial bias.

It is a “difficult truth,” Carollo said, the nation missed a window of opportunity – a lockdown strategy that should have lasted six weeks from the start. What must be done now, he added, is to enact robust testing and contact tracing and an assurance any vaccine would be mandatory for public school attendance and free to the public.

Opening all schools now would be a “disaster,” Carollo said, adding children of working-class families should go to school for lunch programs and childcare provided by schools. Those families who can afford childcare or who can work from home should not send children to school. That way, there would be fewer students in schools and a strict control on class sizes could help ensure safety mitigation policies.

“Even if it means busing some kids between districts, we must keep the numbers down,” he said.

“I would fight to pass (State Senator) John Marty’s health-care plan,” he said. “I want to be clear that my goal is to catch up with every other industrialized nation in guaranteeing care to all people.”

One approach Carollo favors is to make revenue bonds available to finance groups of people who want to form a housing cooperative so people in need can create cooperative housing projects. That, he said, would eliminate government bureaucracy, reduce rents and give working families an “actual ownership stake in their conditions of living.”

Local property taxes keep increasing, he said, due to the “cowardice of Republican leaders” in the House and Senate, who, he argued, “keep passing the buck and grandstanding on the rhetoric of lowering taxes, all the while saddling their own communities with the most regressive and least-efficient taxes.”

That, he said, is the reason he favors statewide funding of schools so rural areas are not so tax-burdened with disproportionate school costs. He also supports a progressive taxation system for corporations based on the difference of pay between the highest- and lowest-paid employees. Such a method, he said, would incentivize higher wages, job creation and small-business investment.

Carollo said bold steps must be taken to reduce carbon emissions and to develop renewable energy. That strategy, he said, would create thousands of jobs. Any losses to workers, farmers or others could be offset by an innovative insurance program to protect those people, he said.

“I want every single road and bridge to be brought up to standards so everyone can sleep safely knowing their loved ones are safe on the road and that their homes are safe from flooding. One-hundred and forty-nine dams in the state are either in poor or unsatisfactory condition.”

Minnesota has always been unified by neighborly values, said Carollo said, and even with the pandemic the state has been the strongest in the nation and a great state to raise a family. That health, he said, is largely due to labor unions, small businesses, commitment to trade schools and constant improvements it the education system.

“I believe we need a resurgence of our spirit of neighborliness and a recommitment to the values that made us what we are today,” Carollo said. “We must care for each other during these difficult times, and we must ensure all Minnesotans are brought into the fold because many marginalized people have been historically left out from our focus of building a safe and welcoming community, with real economic opportunities for all.”