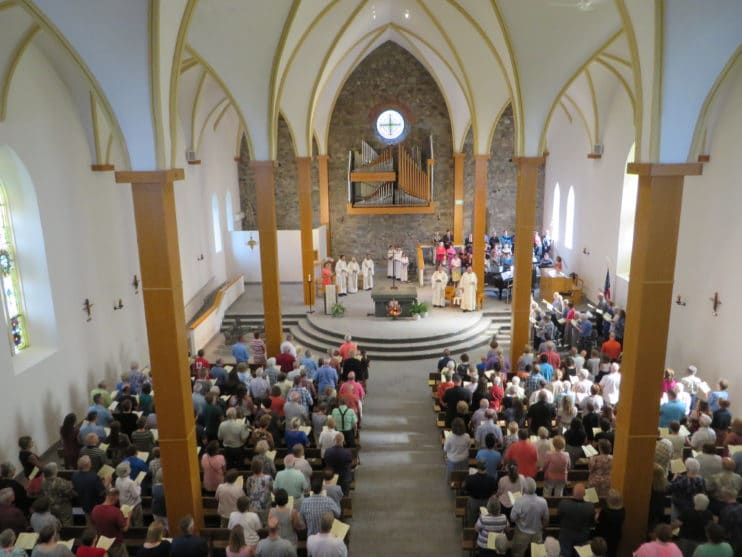 Parishioners from the Church of St. Joseph Catholic Church had a chance to see a newly restored and renovated church interior at a Rededication Mass on June 29.

Church pastor, the Rev. Jerome Tupa commented about the Mass.

“The Rededication Mass called together many of our parishioners, Sisters of St. Benedict’s Monastery, Monks of St. John’s Abbey and of course Bishop Kettler surrounded by five priests,” Tupa said. “With a 30-voice parish choir, an 18-voice choir from the Benedictine monastery, organ, piano, guitars and flute there was glorious music surrounding the various rituals for the Rededication Mass; sprinkling of the walls and original dedication lamps and consecration of the altar.”

The remodel of the church was completed in time for the annual July Fourth parish festival.

Many parishioners participated in the restoration when they helped with demolition of the church interior after a request was made for people to help at the beginning of the year. This help from volunteers saved the parish both time and money.

Volunteers helped take apart the sacristy and tabernacle wall, ripped out carpeting, removed the floor, removed kneelers, prepared food for the workers, cut and removed steam piping and much more.

The remodeling and renovation project, completed by Breitbach Construction Company and others, included removing the floor and filling the crawlspace, replacing column foundations, installing in-floor heat and pouring a cement slab, installing granite tile, new lighting, adding a fire safety sprinkler system, reconfiguring the altar, refurbishing church pews, repairing the ceiling and plaster, painting and a ramp to the sanctuary.

Memento crosses were made by the Bob Ethen family and the Knights of Columbus from the wood and square nails saved from the original 1870 church floorboards. These were available for purchase after Mass. Each church family could purchase one cross for a suggested donation of $20. A sign-up sheet will be available if families are interested in additional crosses at a later date. Proceeds will be donated to the Church of St. Joseph Faith Formation Program.

The restoration and remodeling project was completed in six months and cost around $1.6 million which was raised through a capital campaign.

Parishioners also visited and shared a picnic meal, served by volunteers, in the Heritage Hall Parish Center after the Mass.

According to information provided in the Mass program by Marilyn Salzl Brinkman, the church is the oldest consecrated church in the state and was originally consecrated in 1871. It is built out of stones parishioners brought from farm fields and is home to the world’s only operating Schwalbach Mechanical Clock, which was built by Mathias Schwalbach. A renovation of the interior of the church was done in the 1970s. 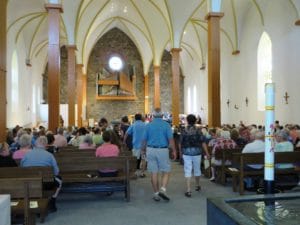 photo by Cori Hilsgen
Parishioners enter the newly renovated and remodeled Church of St. Joseph Catholic Church before a Rededication Mass on June 29. 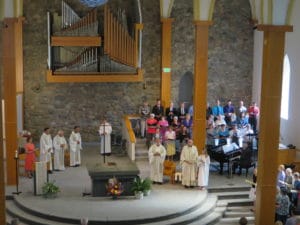 photo by Cori Hilsgen
Bishop Donald J. Kettler celebrated a Rededication Mass June 29 at the newly renovated and remodeled interior of the Church of St. Joseph Catholic Church. The renovation and remodel was completed in time for the annual July Fourth parish festival. 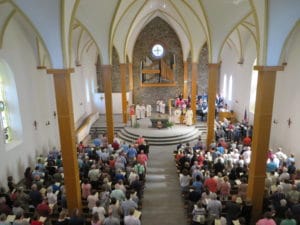 photo by Cori Hilsgen
Parishioners filled the newly renovated pews of the church at the June 29 Rededication Mass. 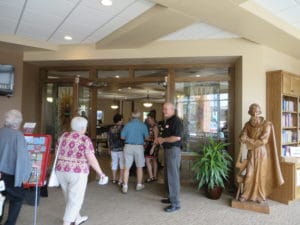 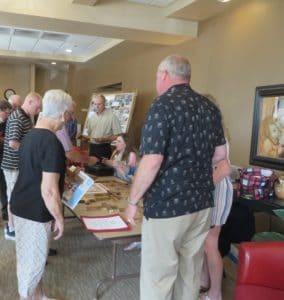 photo by Cori Hilsgen
Parishioners view memento crosses from the wood and square nails saved from the original 1870 church floorboards, made by the Tom Ethan family and Knights of Columbus. 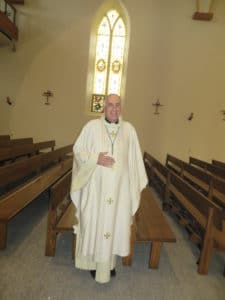