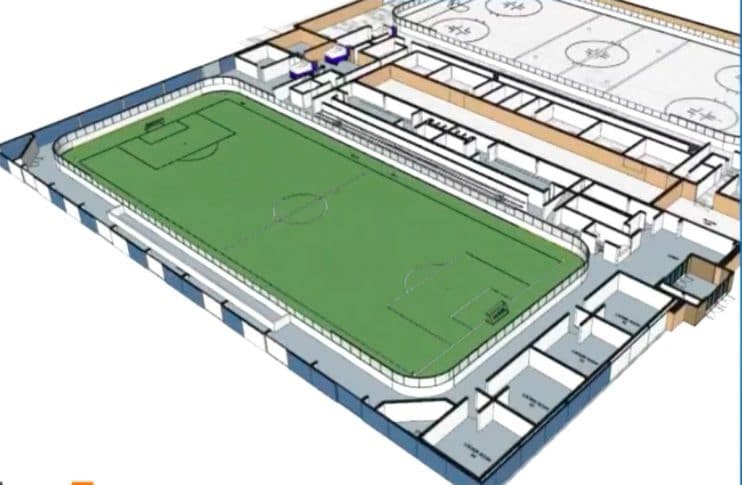 A newly revised plan for expansion of the Bernick’s Arena was presented to the Sartell City Council at its last meeting.

The presenter was Chad Ritter, president of the Sartell Youth Recreation Center, also known as the Bernick’s Arena.

Ritter said that after many listening sessions in recent months with the Sartell City Council members, the school district and donors, it was decided to build an outdoor refrigerated ice rink but one that would be enclosed.

The plan presented to the council about 10 months ago, Ritter noted, involved construction in three phases. The first was the creation of an outdoor multi-purpose, all-weather arena with bleachers that would have been covered only on the top with the sides open to the weather. That phase would cost $2.9 million. The second phase, costing $1.1 million, would be expansion of the lobby. And the third phase, with a price tag of $1.3 million, would greatly expand the locker-room facilities on the south side of the arena.

Now, however, the plan calls for a completely covered ice rink and the other features, all to be done at the same time rather than in phases, Ritter noted. The total cost is estimated at $5.2 million, about the same as the three-phase plans.

The covered arena could be constructed with a heavy-duty fabric material or of pre-cast concrete. The fabric option, Ritter said, has distinct advantages, being an estimated $1 million less expensive than a pre-cast design, and it would have a very high ceiling, making it ideal for indoor practice sessions of baseball, softball and lacrosse.

The arena would also have green turf, making it available year-round for other nonskating sports (spring and fall), as well as other community events. The turf, Ritter said, is a giant roll of specialized soft surface that can be rolled across the concrete floor of the arena.

That feature (turf and indoor multi-sports use) is a huge draw for people to support the overall project, even from people who are not hockey fans, Ritter noted. When an artist’s conception of an indoor turf arena appeared in the Sartell Newsleader, Ritter said he received many calls from people who saw that picture and were enthused about it. The rental fees for use of the new all-weather ice arena could well cover maintenance expenses for the facility, Ritter said.

Construction of the project could begin in fall 2020 and would be completed by summer 2021. Fundraising continues, with about $2,262,000 raised from 14 major donors, and conversations are ongoing with 11 other donors, Ritter noted.

A citywide community fundraising drive will be announced soon. In the meantime, costs and designs for the project will continue to be researched and fine-tuned, Ritter told the council.

The city of Sartell has allowed its contracted engineering firm, Short Elliot Hendrickson, to work on the planning stages of the expansion for consistency and continuity of the public-private partnership. The school district also has input into the planning, Ritter said.

The council members thanked Ritter for the presentation and expressed admiration for the project. 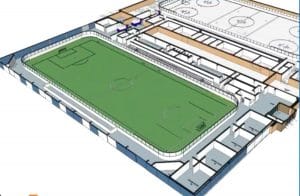 contributed photo
An architect’s drawing shows the arena expansion with turf in place.