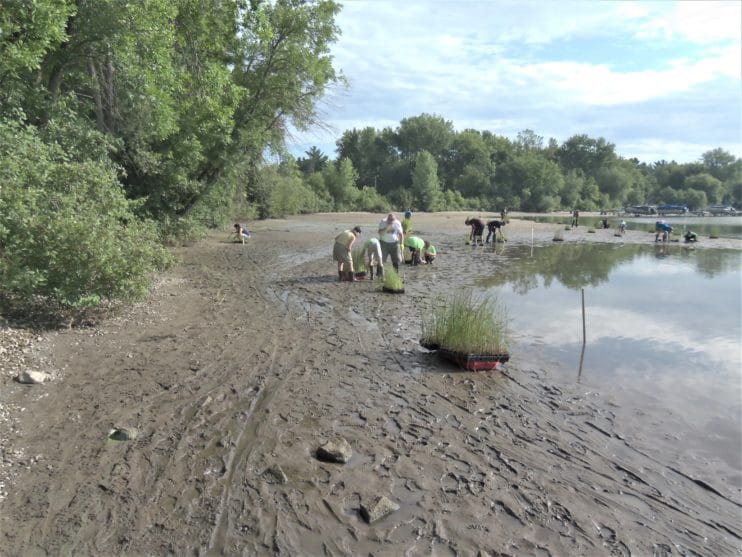 The six-week drawdown project on the river north of Sartell and on Little Rock Lake is now over. Did it produce good results?

Time will tell, according to the Minnesota Department of Natural Resources. The lake and Mississippi River will be closely monitored periodically, but the intended result of the project won’t be fully understood until next August. Even this early, however, there are positive signs.

The drawdown is supposed to have changed the condition of Little Rock Lake so that beneficial aquatic plants will flourish, using up excess nutrients in the lake, such as nitrogen and phosphorous – nutrients that cause harm to the quality of lake water and to fish and fowl. Lake residents, Boy Scouts from many area cities and other volunteers planted 45,000 “good” aquatic plants in exposed areas of the lake after the drawdown in early August. The lake level was lowered by 2.7 feet, exposing about one-third of the lake bottom.

The plants, according to the DNR, are flourishing, although weather, cooler and wetter then expected, somewhat hindered the growth of some of them.

The drawdown ended Sept. 15 when the Sartell dam began to close gradually, causing the river level north of the dam to rise again. The Little Rock Lake water level took longer to come back to normal (about a week) because of the narrowness of the channel and thus slower water flow leading from river to lake.

The DNR reported there were good omens during the drawdown, such as the appearance of lots of pelicans and blue herons feeding at the lake.

During the drawdown process, volunteers cleaned up debris items from much of the lake bottom. Recovered cast-offs included lots of beer cans, vehicle tires, a snowmobile and two intriguing items: the skull of what appeared to have been a horse’s head and a gravestone dating from 1930. Research discovered the stone was from a cemetery in Fosston to mark the burial site of a man named Reier O. Watnaas, who was born in 1860. Fosston is 150 miles north of Rice. It is presumed that vandals, after stealing the stone in Fosston, dumped it later in Little Rock Lake in the channel water that runs under Hwy. 10 about 5 miles south of Rice near Rumors Bar & Grill. Arrangements were made to return the stone to Fosston.

The DNR Fisheries Office, based in Little Falls, will issue results of its post-drawdown studies periodically during the coming year. 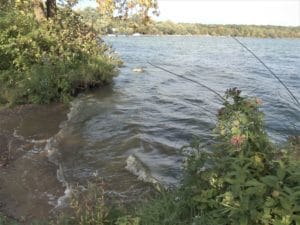 photo by Dennis Dalman
Waves, driven by a brisk south wind, lap onto the shore of the Benton Beach area of Little Rock Lake Sept. 17. Just one week before that date, the area visible in this photo was soggy sand after a lake drawdown that began Aug. 1 and lasted until Sept. 15. The interrelated drawdown on the Mississippi River north of Sartell also lowered the water level by nearly three feet, but the river level quickly regained height when the drawdown ended. In the photo above, thousands of beneficial aquatic plants were planted by volunteers in the exposed lake bottom, as well as many other areas around the lake. Those plants are still there, growing beneath the surface of the water.