Local resident Ema Hartung and her three daughters each recently donated 10 inches of hair to Locks of Love.

Daughters Anna, 9, Erin, 8, and Emily 6, along with Hartung, got their hair cut and donated it at Fantastic Sams in St. Cloud.

The Hartungs have never donated hair to Locks of Love before.

The idea to donate their hair came to Hartung when Anna, who had cut her hair about a year ago, decided she wanted shorter hair again.

“Anna wanted to cut her hair and then Emily started in about having short hair,” Hartung said. “I thought if the two did it, maybe we all could cut it enough to donate. I had not cut my hair in 20 years.”

She said the employees at Fantastic Sams were easy to work with.

“We thought they were great,” Hartung said. “They did the hair cuts for free and took care of sending in the donation.”

Anna, Erin and Emily attend school in Holdingford. As a family, they enjoy walking, biking, puzzles, movies and more.

Hartung is a self-employed bookkeeper and payroll specialist and has her own business, Ema’s Bookkeeping. She is married to Greg, who manages the Casey’s store in St. Joseph and who is a relief delivery driver for the St. Joseph and Sartell Newsleaders. They live in St. Joseph and also have two sons, Seth, 4, and Landon, 9 months.

Locks of Love is a non-profit organization that provides hairpieces, made from donated ponytails, to financially disadvantaged children in the United States and Canada. Recipients are under age 21 and suffer from long-term medical hair loss from various illnesses. Through the hairpieces, the organization hopes to restore self-esteem and confidence for children. 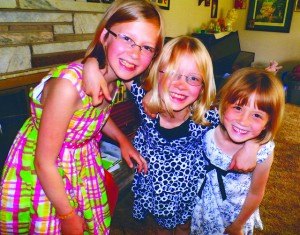 contributed photo
The three Hartung girls (left to right) Anna, 9, Erin, 8, and Emily, 6 show off their new short hair styles after they each donated 10 inches to Locks of Love.

contributed photo
The Hartung family members show the length of their hair from the back before cutting and donating it to Locks for Love.

contributed photo
The Hartung family is shown at Fantastic Sams in St. Cloud before donating to Locks of Love. The family includes (from left to right) Anna, Erin, Ema and Emily.

contributed photo
The Hartung family show their new hair styles after each had10 inches cut off to donate to Locks of Love. Shown are (top, left to right) Emily, Anna, Erin and (front) mother Ema and brother Seth who did not donate his hair.