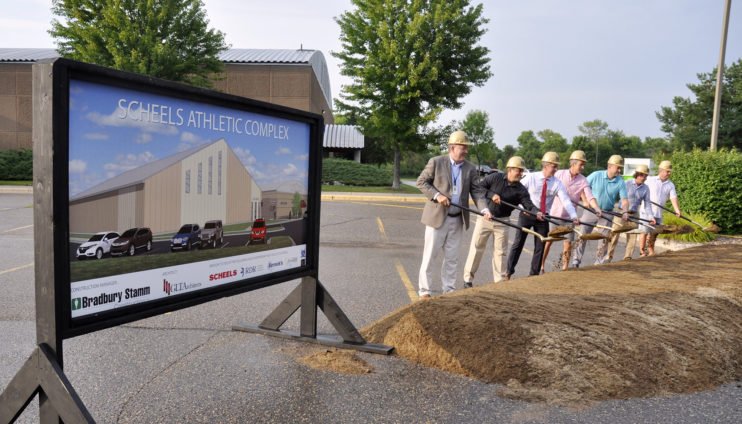 After several years of planning, fine-tuning and fundraising, a groundbreaking ceremony took place Aug. 26 in Sartell for a new sports arena – a private/city partnership project.

As attendees looked on and applauded, a long row of participants turned over spadefuls of dirt on the site of the project, just south of the Bernick’s Arena in Pinecone Regional Park.

Those who attended were city officials, including Sartell Mayor Ryan Fitzthum; members of the Sartell Youth Recreation Center Association; Jeff Schwiebert, superintendent of the Sartell-St. Stephen schools; project volunteers; representatives of GLT Architects (designer of the building); Bradbury Stamm Construction (the builder) and Legacy Building Solutions; members of the Sartell Youth Hockey Association; and officials from Scheels Sporting Goods, Regional Diagnostic Radiologists and Bernick’s Beverage. The latter three are major contributors to the project and were granted naming rights. The new arena will be known as Regional Diagnostic Radiologists All-Sports Arena. The name of the site that includes both arenas, outside areas and parking lot will be the Scheels Athletic Complex. The current arena, built in 2003, will retain its name of Bernick’s Arena. Bernick’s Beverage renewed its naming rights.

After the ceremony, Brian Zimny, president of the Sartell Youth Recreation Center Association, gave some comments to the Sartell Newsleader.

“It’s great to reach this point,” he said. “A lot of people put in a lot of time, work and discipline to make it a success. Thousands of hours of work, loads of talent and millions of dollars were raised to get to this point.”

The new arena, estimated to cost about $6 million, will be an enclosed facility with a fabric roof. For four months of the year, a refrigerated ice sheet will be used for hockey play and practice. During eight months of each year, there will be artificial turf inside, making it suitable for a variety of other sports, as well as special events such as trade shows, arts-and-crafts exhibits, concerts and other kinds of events.

Supporters of the project have long emphasized it would be a recreational and economic boost to Sartell and its residents. Detractors, on the other hand, have criticized the proposal as being too exclusive to one interest group (hockey enthusiasts) and thus city money, such as regional sales-tax revenue, should not be given for the project.

The new arena, like the current one, will receive its operating/maintenance revenue mainly from space rentals – many of them from the school district, as well as rental fees for special events, sports and nonsports.

Proponents, however, noted repeatedly at council meetings the new arena will be used eight months of the year for a wide variety of other sports and community events – thus, they said, it is not “hockey exclusive.”

So far, the SYRC and the Sartell Youth Hockey Association have raised about $3 million in donations and long-term pledges for athletic-complex expansion, according to project planners. Another phase of fundraising – a community fundraising drive – will begin this month, as announced at the groundbreaking ceremony. The community-drive organizers hope to raise the rest of what they’ll need – about $500,000. 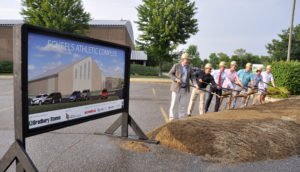 photo by Mike Knaak
A line of participants with shovels breaks ground for the new arena in Sartell. It will be known as the Regional Diagnostic Radiologists All-Sports Arena, after one of its major contributors. From left to right are Jeff Schwiebert, Sartell-St. Stephen School District superintendent; Dr. Brad Hilger of Regional Diagnostic Radiologists; Kevin Murphy of Scheels All Sports; Brian Zimny, president of the Sartell Youth Recreation Center Association; Cory Oberg, president of the Sartell Youth Hockey Association; Jason Bernick of Bernick’s Beverage; and Sartell Mayor Ryan Fitzthum.