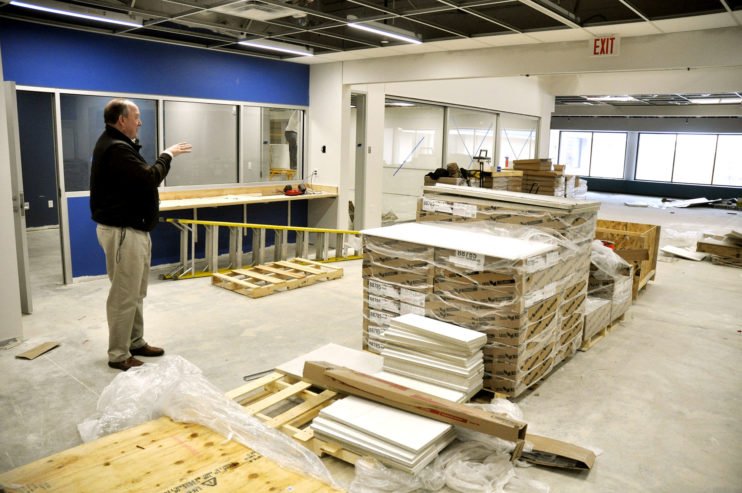 Remodeling and construction work converting the 1993 high school that served grades nine through 12 to a middle school for sixth- through eighth-graders is more than 75 percent complete.

“There’s more open access for kids to use technology, a much easier way for them to flow from one spot to another,” Superintendent Jeff Schwiebert said.

When middle school students arrive this fall, they will find an enlarged media center with full views of the woods outside the school. Years ago, the library at the current middle school was converted to four classrooms.

The current middle school serves four grades – fifth through eighth – with about 1,300 students. The remodeled former high school building will serve three grades with an enrollment of about 930.

“We’re so packed at the current middle school, it will be so nice for those kids to have some space,” Schwiebert said.

There’s new paint and carpeting throughout the building with the omnipresent mauve replaced with a bright blue.

Outside the science rooms, a student work space is decorated with geometric shapes to give the room an “ice cave” feel.

Above the entrance and cafeteria, workers are replacing the energy-inefficient skylight with new energy-efficient materials. Down below in the cafeteria, classroom furniture is piled high.

In the southeast wing, spacious music rooms for band, choir and orchestra replaced the industrial technology labs. What were once garage doors have been converted to large windows in the orchestra room.

Outside, major work is underway repairing the metal roof and the wood underneath, which had been damaged by ice dams.

John Waletzko, superintendent for contractor Bradbury Stamm, said there are 40 to 50 workers on the site each day. The work should wrap up in early May.

photo by Mike Knaak
John Waletzko, superintendent for contractor Bradbury Stamm, holds one of the pyramid-shaped acoustic tiles that will decorate the ice cave.

photo by Mike Knaak
Superintendent Jeff Schwiebert shows the work underway in what will be the media center.

photo by Mike Knaak
While work goes on elsewhere, classroom furniture is stacked up in the cafeteria.