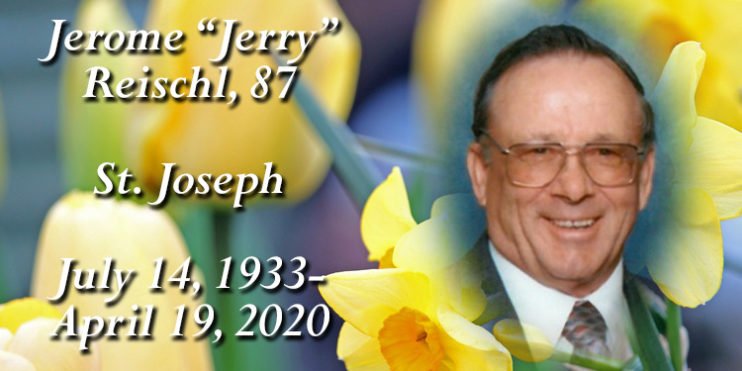 Jerome “Jerry” Joseph Reischl died peacefully, in the comfort of his own home, in St. Joseph, on April 19. He was surrounded by those who loved him. In respect for public safety due to COVID-19, Reischl was honored through prayer with his immediate family, followed by a private graveside internment at Minnesota State Veterans Cemetery in Little Falls on April 23. Memorials preferred.

Reischl was born in Collegeville, Minnesota on July 14, 1933 to Theresia (Schrom) and George G. Reischl. The second oldest of five brothers, Reischl developed a strong sense of duty and hard work from an early age, which he applied to serving his family, faith, country, community and work throughout his lifetime. He was enlisted in the U.S. Army for six years, both in active duty and as a reservist, and he was a long-term member of the American Legion – St. Joseph. While he held different work positions, from electrician to excavator, it was his 55-year career as a truck driver for Anderson Trucking people will remember most. After he retired at age 65, he continued to drive for Anderson, well into his 80s. He was recently recognized as the longest serving employee in the history of the company and was estimated to have driven over six million miles during his lifelong trucking career.

While not working, Resichl loved to hunt, fish, snowmobile and especially looked forward to bow-hunting and archery league each year, for which he won many trophies. Not one to sit idle, he supported the St. Joseph community and parish through his volunteer work over decades. He served on the St. Joseph Parish Cemetery board of directors and worked as a groundskeeper for the parish cemetery. He was a member of the St. Joseph Parish for more than 60 years. He also organized and led the color guard that marched in the St. Joseph parade and performed at military funerals at the Minnesota State Veterans Cemetery in Little Falls.

Most of all, Reischl loved people, and people loved him. He was a caring man who was willing to help anyone in need. While he liked to make things better for others, he lived for spending time with the couple’s children, grandchildren and great-grandchildren, who were the lights of his life. Many family gatherings took place on the well-manicured lawn, where every leaf had to be removed as soon as it fell. He enjoyed coffee and playing cards with friends, and he loved to make people laugh. He was forever a jokester and had a great sense of humor. It was his lighthearted, good nature and kind heart that made him so likable and makes the pain of his passing even harder. He will be deeply missed.

Survivors include the following: his two younger brothers, Bob (Ann) and Harry (Mary) Reischl, both of St. Joseph; his devoted wife of nearly 64 years, Rose Ann “Rosie” and the couple’s children and grandchildren, all of who were a great source of pride: daughter Debi (Tim) Barthelemy of Otsego and their children, Dustin (Ashley) Guggenberger of St. Cloud, Krista Reischl of Los Angeles, Nicholas (Amanda) Barthelemy of Lake Elmo, Abbie (David) Linder of Buffalo, and Ashley (Jason) Houtman of Mound; son Randy (Sue) Reischl of St. Joseph and their children: Amanda (Scott) Caird of Rice, Nicole (Ryan) Fischer of Rockville, and Adam (Ali Schwinghammer) of St. Cloud; and son Rick (Lexann) of St. Augusta and their children: Brienne Reischl of Barcelona, Spain; Owen Reischl of St. Cloud and Sydney Kakuk of St. Augusta; and 12 great-grandchildren.

In addition to his parents, Reischl was preceded in death by an infant brother, Clarence, and his brother, Ralph.

The family wishes to thank the many nurses from CentraCare Hospice, whose care made it possible for Reischl to stay in his home during his final days.