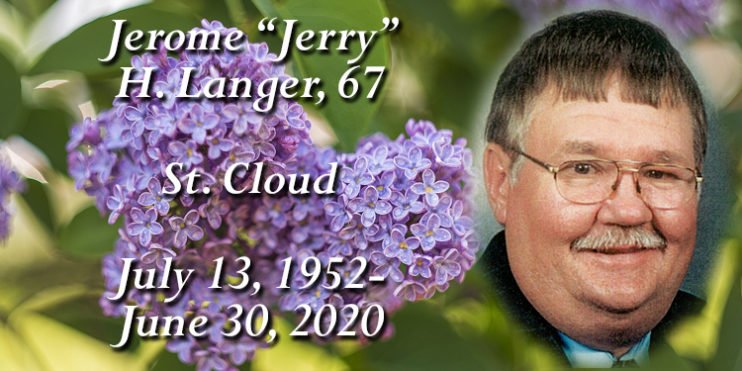 Jerome “Jerry” H. Langer, 67, died June 30 at St. Benedict’s Senior Community in St. Cloud. His funeral will be held at 11 a.m. Saturday, July 11 at St. Francis Xavier Catholic Church in Sartell. The Rev. Ronald Weyrens will officiate and burial will be in the parish cemetery. Visitation will be one hour prior to the services at the church. Arrangements have been entrusted to Williams Dingmann Family Funeral Home, Sauk Rapids.

Langer was born July 13, 1952 in Pierz to Martha (Koll) and Carl Langer. He grew up on a farm in Pierz and lived in Sartell most of his adult life. Langer married Patricia Miller on Aug. 27, 1977 at Sacred Heart Catholic Church in Sauk Rapids. He worked for Fingerhut for more than 30 years and was a member of St. Francis Xavier church where he served as an usher. He was a board member of Catholic United Financial. Langer enjoyed fishing, hunting, camping, fish fries, watching Jeopardy and Wheel of Fortune, and playing cards with family and friends. He was easy going, loving, faithful and always put family first. Most importantly he was a wonderful father and grandfather who will be missed by all who knew him.