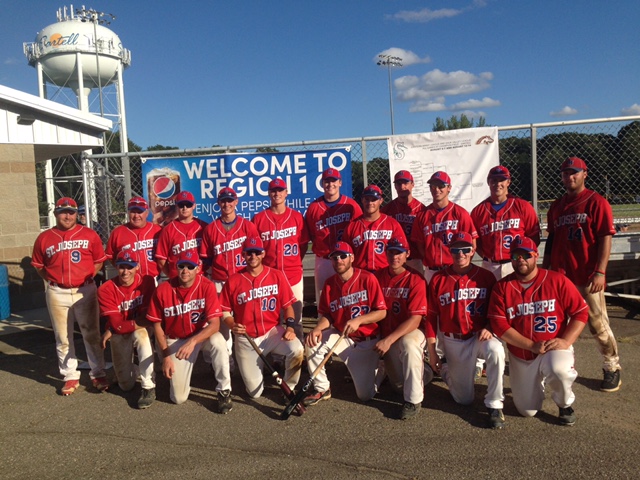 After getting into the state finals with high hopes, the St. Joseph Joes’ season sputtered to a close as they were shutout by the Maple Lake Lakers 2-0 in Hamburg.

“We patched together a pretty competitive team after losing several of our starters to injuries and so on,” said Pat Schneider, the Joes’ coach. “Both pitchers were very similar and very difficult to score on.”

It wasn’t that St. Joseph played poorly. Terry Hadden, the drafted pitcher from Nowthen, threw a good solid game allowing just four hits in total. But the Lakers were able to string together a couple of hits and sacrifice flies in the early game to push their two runs across the plate.

In the first inning, the Lakers’ Riley Decker reached on a bunt single. He moved to third after Luke Fobbe bunted and Matt Bergstrom got hit by a pitch. Donnie Mavencamp hit a sacrifice fly to the left to score the first run. Despite having loaded the bases with no outs, the Lakers were only able to score on that run because of the tenacity of Hadden.

In the second inning, Brian Redemske singled and then later scored on a sacrifice fly by Decker. That was the extent of the Laker scoring.

Two runs was all Laker pitcher Mitch Wurm needed as he allowed five scattered hits in nine innings. The Joes just couldn’t find a way to put the hits together and took it on the chin.

“We had a lot of two-out singles, but with a two-out single, you can’t advance that runner,” Schneider said. “In the eighth (inning) we had a two-out double, so we were on second base. But again, moving him over to third is difficult to do.”

That threat in the eighth had Ethan Carlson doubling and Brandon Bloch walked, but a strikeout ended the challenge and the season for the Joes.

“It was a well-played game,” Schneider said. “Pitchers were around the strike zone and hitters had to be ready. But we had nothing to hang our heads about. We played hard and we played well.”

Schneider looked back over the season and was generally pleased with it.

“We started out knowing we were very young, but we managed to put up a lot of late-inning rallies to win ball games,” Schneider said. “We developed some really good chemistry, and it looked like we were heading in the right direction and working our way up the ladder to becoming a state-caliber team which we did.”

By June the team had jelled and they knew they had something good. Unfortunately, other obligations and some key injuries raised havoc with the team. What was most impressive on this team was the team speed. That was because of the youth of the team Schneider suggested.

“We made a lot of difficulty for other teams when we got on base,” Schneider said.

Defense was another part of the team’s strategy, but at the end of the season, the team lost two really good base runners, Schneider said. That hurt that aspect of the team. Overall, Schneider said he was very pleased and he looks forward to next year and future seasons. If some of those guys continue to play until they are 30 or so, they will be really fun to watch as they gain experience.

“Because,” Schneider said, “baseball is a game where you get the lesson after the experience. The more experiences you have, the better ball club you are going to have. You really don’t learn the game until you have a bunch of these amateur baseball games under your belt.”

He concluded by saying if some of the guys continue to play, they will have a really good ball club. He is looking forward to seeing them develop.

While he will be cutting back on his work with the league a little bit, he is definitely planning on being back next season to coach.

“That part of my life will change, but I’ll still be involved with our local team,” Schneider said.

Born and raised in Wisconsin – a “Happy Days” high school experience. Attended UW-River Falls and followed their motto – “Where the free spirit prevails.” Four years in the Army Security Agency (Spies), 31 years teaching English and directing plays. Other jobs – gandy dancer, counselor at mental institution, snowmaker, apple picker, concrete finishing, janitor, furniture mover, appliance sales, insurance sales, media sales, real estate, and writer. I am skeptical to a fault and like all human being I am more oxymoron than I am anything else. I blog at http://www.curmudgeonstwist.net/