The capital campaign of $1.3 million was made possible with more than half the money privately raised and the city of Sartell contributing the balance of the funds.

That means an estimated 70,000 baseball enthusiasts, families, players and fans are visiting Pinecone Central Park this summer, according to the baseball association.

The Pinecone Central Park Association also announced that Ryan Cross, president and CEO of BCI Construction, has signed on to be the sixth and final field sponsor.

BCI Construction’s contribution allows completion of the final field at Pinecone Central Park making it playable for the age 9-13 teams in 2020.

contributed photo
The first pitch is thrown at Gilleland Field. 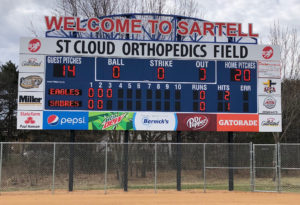 contributed photo
The scoreboard at the recently dedicated at St. Cloud Orthopedics Field.