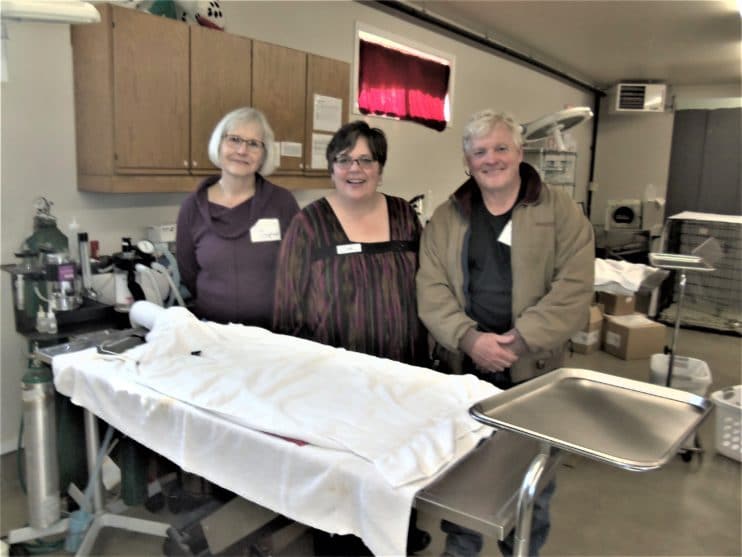 Even a brief review of the Tri-County Humane Society’s annual report for 2018 makes abundantly clear why a new building has to be constructed.

A tour of the current facility underlines that fact.

Ground will soon be broken for a $3.5-million shelter building just to the west of the current facility, which will be demolished. Fundraising continues for the new project, with about slightly less than $1 million still to raise, and pledges for up to a five-year time frame are being accepted. There are also naming-rights available.

The new TCHS facility will be twice the size of the current one.

The current building, which opened in 1989, is an extremely busy and jam-packed place, as the following facts demonstrate. In 2018, the TCHS did the following:

• Placed 1,204 pets in foster homes for three reasons (the animals were pregnant, too young or too small, or had medical issues).

• Welcomed 200 volunteers to give of their time and skills for the sake of the animals and adoptees. Those volunteers worked 18,800 hours for a total monetary equivalency of $475,000.

Throughout the last four-plus decades, the number of animals brought to the shelter vastly increased, the number of programs and volunteers grew by leaps and bounds and TCHS staff had to adapt to crowded quarters. It rapidly reached the point where staff had to become ingeniously improvisatory to “make do” with tiny rooms and spaces that had to be used for so many needs.

As TCHS Executive Director Vicki Davis put it: “We have done a lot of improvising over the years – patching, repurposing and tacking on as best we could.”

A new building, she added, will allow staff and volunteers to do an even better job in a place of greater comfort and help for the animals. The new facility is being designed for efficiency so animals, staff, volunteers and visitors can better inter-relate in conditions less crowded, less stressful.

The TCHS is now conducting tours of the current (old) building so members of the public can see for themselves. One afternoon in late October, TCHS Director of Philanthropy Tauna Quimby conducted one of the tours. It began in a medical building (to the southwest of the shelter) where surgeries (mainly spaying/neutering) are performed. The tour then moved on to the shelter building.

Quimby said during the tour day there were 130 animals in the shelter and 244 in foster-care homes of volunteers.

Tour participants poked their noses into many rooms – an intake room where new animals are checked for fleas or other problems, a room lined with cats in cat cages, rooms filled with eager dogs up for adoption, a busy laundry room, a meet-and-greet room for pets and prospective adopters, kennel areas where animals can be let out for exercise or to interact with visitors.

In the dog rooms were visitors checking out the pooches, who elicited oohs and ahhs from the people – especially two delightfully cute sibling Dalmatians dubbed Perdita and Pongo.

Another room, as crowded as the others, contained miscellaneous adoptable critters, such as rabbits, guinea pigs, hamsters, snakes and even some birds.

In all of the rooms – even the break room – supplies are stacked, shelved, crammed in, with staff doing their work practically elbow to elbow.

Every staff members has a favorite heartwarming animal story to tell. Laura Lund, animal-care manager, told the tour participants how she is still thrilled that two very elderly dogs brought in three weeks previously were both adopted, by the same family.

Tour guide Quimby shared one of her many favorites. One day, before the shelter even opened, there stood an animal-control officer with a chicken under his arm. When a worker arrived, she said to the man: “A chicken? We’ve never had a chicken here.”

“Well, you do now,” said the man, smiling, explaining it had been found in the Sartell area.

The staff were thrilled about their new arrival but scratched their brains about how best to get it – perhaps – adopted. They decided to put a photo of it on the TCHS website. Within 24 hours, a woman arrived at the shelter and asked to see the chicken. She was taken to the small-animals room where she stood stunned and smiling in front of the cage and its contents, a chicken and some freshly laid eggs. And then, in a sudden swirl of cackling and commotion, the critter stood up, beat its wings up and down, squawked and performed a manic version of the “Chicken Dance.” Sure enough, it was the woman’s chicken, lost for several months and at long last reunited.

The staff members also have favorite stories of the people who love the humane society. One of them, Quimby said, is a young girl named Addie who lives in Sartell. She loves dogs, even though her family does not have one. One summer, she offered her help in the neighborhood to clean up doggie waste for a small fee. She saved all she earned and made a gift of the money – $100-plus – to the TCHS. So many pet enthusiasts raise funds for TCHS in a variety of ways: garage sales, lemonade-stand sales and organizations like Sartell Youth Hockey, to name just one.

Director Davis, who has been with the TCHS for 35 years, met with participants at the end of the tour. She recalled the first humane society was located in a run-down, dysfunctional former gas station. When the staff moved into the new (current) building, it was like entering the “Taj Mahal,” she recalled. But the “Taj Mahal” quickly became overcrowded, and now Davis, staff, volunteers and no doubt animals will be happy to move into a new “Taj Mahal,” a bigger, more efficient, less stressful one.

People can also take a virtual tour, including seeing an artist’s conceptions of views of the new building, by going to:

Anybody who wants to donate to the TCHS Building Fund should go to its website at www.tricountyhumanesociety.org and hit the “Donate” button. 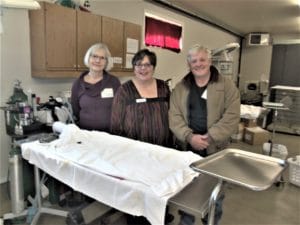 photo by Dennis Dalman
Tauna Quimby (center) is the Tri-County Humane Society’s director of philanthropy and also conducts tours of the current TCHS facility. Here, in the surgical room, Quimby prepares to lead a tour. At left is tour participant Mary Puterbaugh of Waite Park, who also assists with some TCHS surgeries; and at right is Dave Masters, an educator and St. Cloud City Council member. 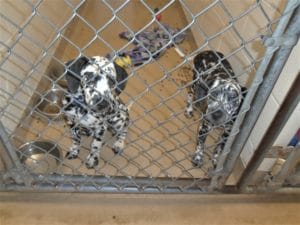 photo by Dennis Dalman
Sibling Dalmatians dubbed Perdita and Pongo await a “forever family” at one of three canine adoption rooms at the Tri-County Humane Society. 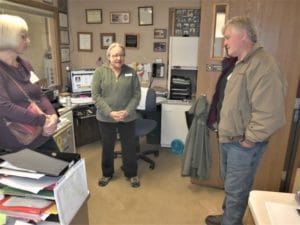