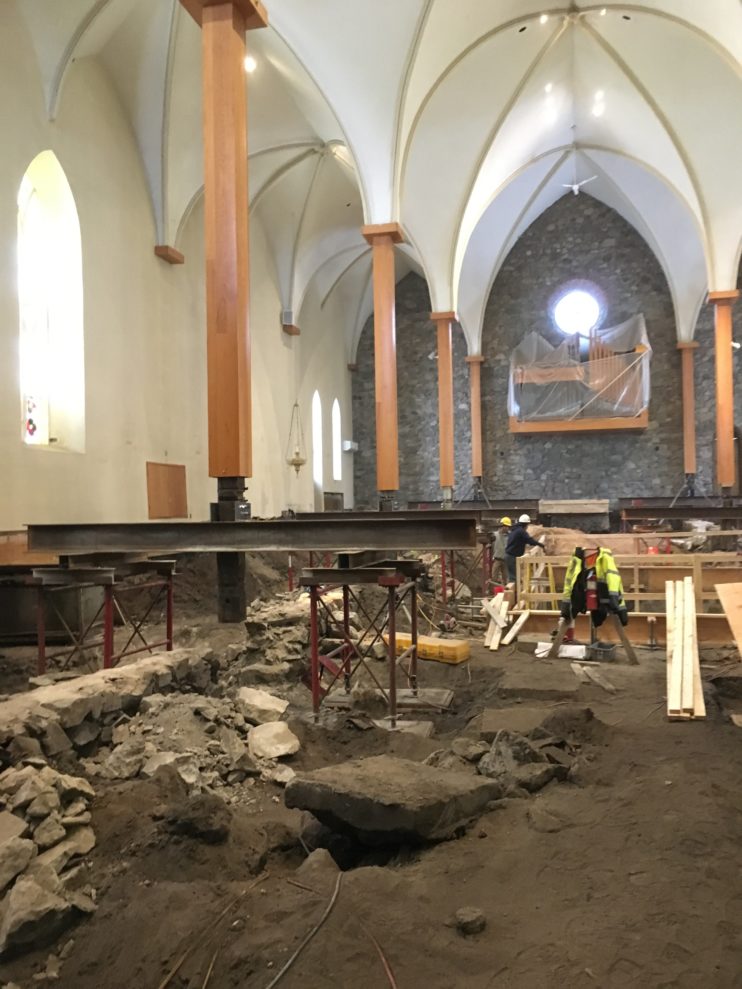 Locals have always known the foundations of the Church of St. Joseph run deep. But a recent renovation has confirmed it. Underneath the worship space runs two hand-built, stone-wall foundations the length of the church.

The foundations have held up the roof for 150 years, but are getting an update this winter. Construction crews will reinforce the structure, make the church more accessible and add sprinklers to prevent major fires. Dating back to 1863, the church has gone through other renovations, adding stained glass in the early 1900s and doing a major remodel of the church interior in the 1970s.

This time, they’re being more thorough.

“We’re back down to the dirt,” said Andy Loso, facility manager.

Church volunteers completed the demolition inside the church earlier this year, in a shorter period of time than the contractor predicted, he said.

“They said it would take two or three weeks and we were done in a week and a day,” Loso said. “They don’t know how the St. Jo(seph)parishioner guys work when they’ve got something to do.”

Loso said it was a good project for the community.

“Because there isn’t much in the church that the men can bond (over) but they seem to like to do that,” Loso said. “That’s the neat part about the story, in my opinion, is the parishioners buckling down and helping.”

There were an average of 25 volunteers each day, he said.

While the extreme snow and cold of the past few months may have hindered outside construction, the remodel may have benefited.

“When it was bitter cold, they sent everybody in here and they were working,” Loso said.

The renovation includes a reinforcement of the foundations.

“We knew these stone footing lines were here, but we didn’t know how good or bad they were,” Loso said. They decided to remove portions of the wall and replace them with concrete.

While crews used jackhammers to make room, the columns were held up by make-shift steel anchors. Watching the process was nerve-wracking, Loso said.

“(The beams) hold the entire roof up,” Loso said.

With the new concrete foundations poured, crews hauled in about 500 yards of fill. Loso said the first pour of cement should happen in early March. The floor will taper down to the front of the church to increase visibility.

The church has always had a partial basement, which crews are reinforcing to house new electrical and heating equipment.

“Prior to that, when there was something broke I had to crawl around in here underneath the floor. But at least we had the flexibility to do that,” Loso said. “Now, when we pour a brand new floor in here we won’t have that option any more.”

Because they’re so old, the demolished materials are of some value.

The wood was nailed down with old square nails. Loso carries a few in his pocket to show the curious. He plans to use a few for cribbage pegs on a cribbage board he’ll make from some of the floor wood.

“A couple parishioners grabbed a bunch of stuff that wasn’t sellable to anybody,” Loso said. “They’re busy making crosses, mementos for whoever wants one.”

The pews were sent to Maselter Cabinets in Rockville for restoration. They date back to the ’70s, Loso said.

They’ve also had a few unexpected finds during deconstruction, including a mural.

On the back wall of the sanctuary, crews discovered more wall paintings, which could also be restored, Loso said.

All of this started five or six years ago, when Loso and the Rev. Jerome Tupa talked about redoing the worship space floors.

“Originally, we were just going to repaint everything and put new carpet down,” Loso said.

But a priest friend of Tupa’s who’s also an expert on liturgical church design provided some informal advice.

“He came in and started presenting ideas,” Loso said. “It made sense, because while we were at it, the diocese wanted sprinklers no matter what.”

Sprinklers were key to preventing another major fire in one of the churches of the Diocese of St. Cloud. In 2016, the Church of St. Mary in Melrose received significant damage in a fire. It was built around the same time and in a similar fashion to the church of St. Joseph, and so likely had a similar fire risk.

Adding fire protection included making holes in the ceiling for sprinkler heads as well as running water up to the roof. It will be a dry sprinkler system, Loso said, because the attic isn’t heated and the winter temperatures get below freezing.

The church floor was also getting more and more uneven.

“This floor here had moved a lot over the years. And in the last five years, there were spots that were 2 inches lower, ¾ of an inch higher,” Loso said.

It also had some accessibility issues, like the Church of St. Mary did. The church also used to have fully enclosed rooms for taking confession. They looked like ice houses, Loso said. They didn’t look great and they weren’t up to current church standards. A major renovation could solve a lot of problems.

Loso is trying to be a steward of the property as he directs the project. 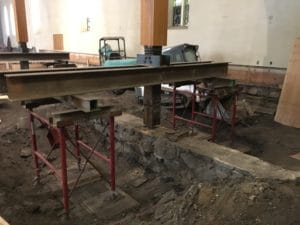 Two hand-built stone foundations run underneath the Church of St. Joseph in St. Joseph. The foundations are getting a concrete update in a major renovation. 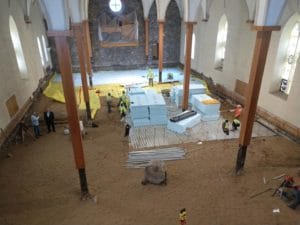 contributed photo
Once new foundations for the Church of St. Joseph in St. Joseph were complete, crews hauled in 500 yards of fill and added a vapor barrier. 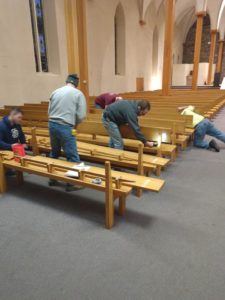 contributed photo
Volunteers from the Church of St. Joseph in St. Joseph helped demolish the old flooring to start a major renovation of the church. The pews were taken out for restoration and will return once the floor is finished. 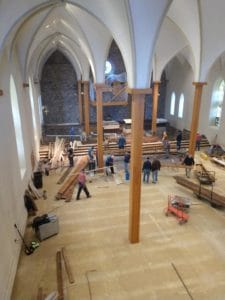 contributed photo
Volunteers from the Church of St. Joseph in St. Joseph helped demolish the old flooring to start a major renovation of the church.