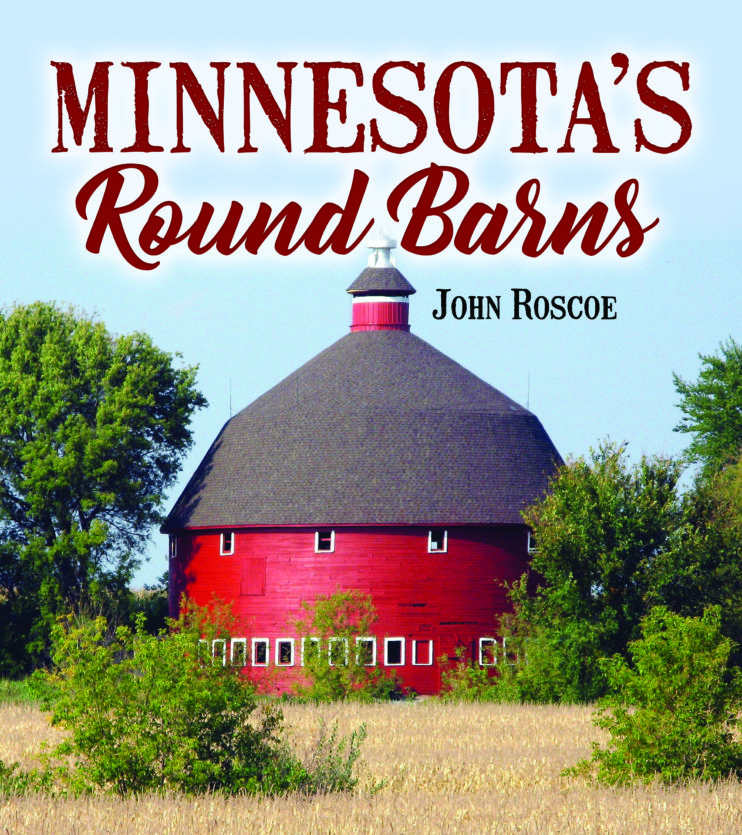 The round barn in south Sartell, abandoned for years and so forlorn-looking, was the inspiration that led John Roscoe on a 10-year round-barn odyssey throughout Minnesota.

That long persistent pursuit resulted in the recent publication of Roscoe’s “Minnesota’s Round Barns,” an exploration of a bygone era in photos and text. Roscoe will host an autograph party for his new book from 2-5 p.m. Saturday, June 1 at the Blue Line Bar & Grill in Sartell. The book can also be purchased online at lakesidepress.com.

This is Roscoe’s second published book. In 2009, he published “Legacies of Faith,” a book about the history of the oldest Catholic churches in Stearns County that Roscoe co-wrote with his brother, Bob.

About 10 years ago, some residents of Sartell, most of them history buffs, began proposing that the round barn in south Sartell should be restored and repurposed into a historical center where the city’s old artifacts could be displayed.

That dream proposal soon dissipated, however, when it was learned that restoration of the structure would be prohibitively expensive. Efforts to find a buyer and financial support for the project failed.

The Sartell barn was built in 1928 on the Peter Fasen property in what was then Le Sauk Township. The structure was constructed of reinforced concrete with its interior silo also of concrete. Once surrounded by farm fields, the round barn is now being encroached upon by commercial and residential developments.

In 1978, the Fasen property and its barn were purchased by two brothers, Michael and Wilfred Weyer. They continued to use the barn for raising steers and kept hay in the upper loft and silage in the central silo. The barn was used until 1993, at which time it succumbed to abandonment.

President George Washington was actually the first proponent of the round-barn concept on his farm in Fairfax County, Virginia. He had one built in 1793 for use as a threshing process. Horses would run in circles around the planked floor, crushing the wheat that had been placed there, the kernels falling through gaps in the oak planks. It was more efficient than people flailing the wheat stalks to release the kernels.

Fast forward to 1848 when the octagonal (eight-sided) round barn was introduced. Once again, farming efficiency and cost were prime considerations. Round-barn construction increased dramatically, starting in the late 1880s. Long before farming became large scale in the mid 20th century, the number of dairy cows on a family farm ranged from about 15 to 30-plus cows.

Most round barns made for efficient production. The entire herd of cows could be placed for milking in stanchions in a round barn, their heads facing toward the interior silo where silage food would be dispersed for each and every cow.

Roscoe developed a keen interest in the round barn in Sartell when talk of its possible restoration began. He started the research process and decided to photograph every round barn in Minnesota. At one time there were 180 round barns in the state. Now there are 48 of them, ranging from well-preserved and/or lovingly restored to sagging and buckling structures ravaged by weather and time.

Before he began his round-barn adventure, Roscoe thought it would be a daunting task trying to discover the location of every barn in Minnesota.

As luck would have it, he learned a Minnesota State University, Mankato professor, Roy Meyer, now deceased, had researched the location of all round barns still in existence in the state and then placed that information on the internet.

Even so, it was still difficult in some cases to find the exact locations of some of the barns. Roscoe and his wife, Fran (whom he calls his navigator) set out on their many journeys from one end of the state to another. Trying to find a barn near the small town of Trail in northern Minnesota’s Polk County was a bit like being caught in a maze for the Roscoes, trying this back road and that and yet another. Finally, they stopped at the town’s small bar where a woman bartender knew exactly where the barn was located.

The Roscoes drove up to the old barn, built sometime in the early 1900s. Its roof was tilting and sagging, its sides bent and buckling – a magnificent ruination.

Roscoe takes great pains to find out something of the history and first owner of each barn. In the case of the Polk County one, he struck out. That is, until he learned of a township supervisor who lived in Trail. Roscoe wrote her a letter. She wrote back, giving the name of a woman who grew up near the barn and who still lived in that neck of the woods. She, Lynda Turenne, was surprised to think anybody would be interested enough in the old barn to put it in a book. She was also surprised by the coincidence that her daughter lives in Sartell, within a mile of the Roscoes. Next day, Roscoe received an email from Turenne of her girlhood memories of the barn. It was, she wrote, built by her great uncle. Turenne’s parents later purchased the barn from the great uncle, in 1932.

Turenne’s email was so well written and heartfelt, Roscoe decided to publish it verbatim on the text page next to the photo he’d taken of the barn.

“It (the barn) was unique in that it was perfectly round. My great uncle soaked the wood for many months so it would curve to 360 degrees. My brother, sister and I grew up playing in that round barn, and as our families grew, they played there too. The barn is still standing and all the grandkids and great-grandkids and now the great-great-grandkids love the farm more than ever.”

Turenne checked into restoring the barn, but the cost was just too much.

“So, soon, the barn will just live in our hearts and memories. However, the barn is etched on the headstones of my parents in a little country cemetery, just two miles from their beloved farm and round barn.”

The oldest barn in Minnesota is a 16-sided one built in Le Sueur County in 1886. The newest is one in Swift County, dated 1943.

There are 30 of Minnesota’s 87 counties where round barns still stand. All those counties (and all 48 barns) are featured in Roscoe’s book. There are two in Stearns County, two in Benton County.

One of the pleasures of Roscoe’s adventure is the many descendants of barn owners he came to meet and the wonderful stories they shared with him.

“I learned so much about Minnesota,” he said.

Fran Roscoe worked for years in a medical clinic.

They have two children – Michael, of Minneapolis; and Christine, of Long Prairie. They have two grandchildren, Abigail and Evan, the children of Christine.

Roscoe is considering doing another book of photos and text – one about stained-glass windows. 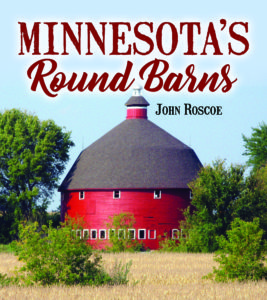 contributed photo
A bright-red round barn in Hennepin County graces the cover of John Roscoe’s just-published book, which features all of Minnesota’s 48 round barns in photos and text. This barn is between St. Michael and Rogers. 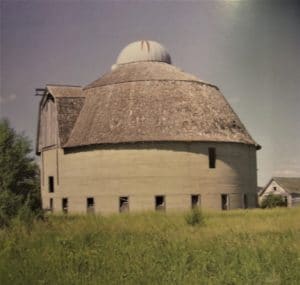 photo by John Roscoe
This is the round barn in south Sartell, built of reinforced concrete in 1928 but rapidly aging and neglected since 1993. 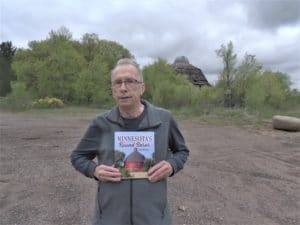 photo by Dennis Dalman
John Roscoe holds his newly published book, “Minnesota’s Round Barns.” Behind Roscoe, in the distance, is the round barn in Sartell that inspired his 10-year odyssey to photograph and write about all the round barns in the state.