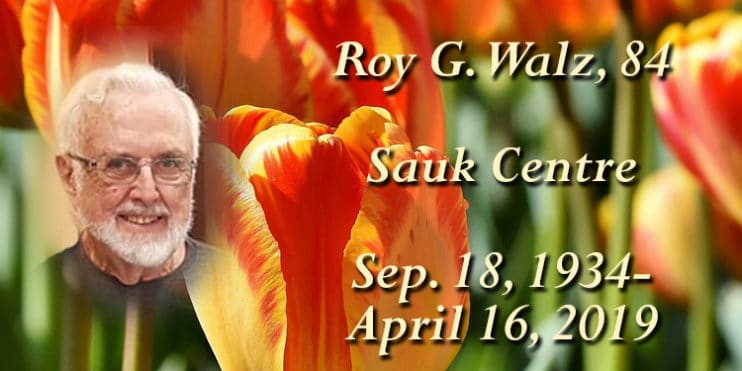 Roy G. Walz, age 84 of Sauk Centre, died April 16 at the St. Cloud Hospital due to complications from a surgery.

His funeral was held April 26 at St. Paul’s Catholic Church in Sauk Centre. Inurnment was in the parish cemetery with military honors by the Sauk Centre United Veteran Honor Guard.

Roy George Walz was born Sept. 18, 1934 in Nevis, Minnesota to Alois and Florence (Biganik) Walz. They later moved to St. Joseph, Minnesota where they co-owned the El Paso club. Walz graduated from St Cloud Tech High School and went onto school at Dunwoody College. He moved to Sauk Centre where he met his bride Anne Foss; they were married Nov. 3, 1962 at Our Lady of Angel’s Church in Sauk Centre.  They resided in Sauk Centre, and Walz was employed by the Minnesota Department of Transportation in St. Cloud where he retired. He also served more than 20 years in the Army National Guard until his retirement in 1990. Walz was an active member in the Sauk Centre Lions Club, and he served as a board member for the Sauk Centre Public Utilities and for the Planning and Zoning committee. He volunteered with the Sauk Centre Meals on Wheels program and the Sauk Centre Food Shelf.

Walz was a hard-working father and husband who enjoyed spending time at his cabin up north, and in his younger years he enjoyed snowmobiling and fishing with his friends. He loved going to see his grandkids’ sporting and school events when he could, and during the winter he was part of a card-playing club. Walz will be remembered for his quick-witted comments to questions when he was asked and the little smirk he would give after each response. He will also be remembered for being able to tell you all
about the roads you drive on and what he did to help construct them. There was never a time where we took the same road somewhere because he always had to show us a different route.

He was preceded in death by his wife; Anne Walz; parents; and three sisters.

In lieu of flowers, memorials are preferred.

Arrangements were made with Patton-Schad Funeral & Cremation Services of Sauk Centre.