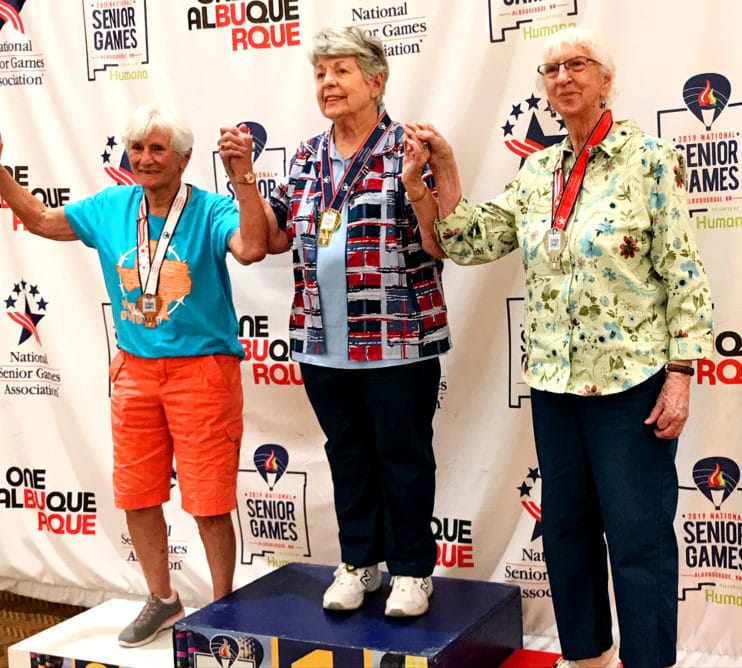 Violet Halverson returned to the medal winners stand, this time for a Silver Medal at the National Senior Games.

Halverson, 94, of Sartell won her medal in shuffleboard competing against other women in the 90-94 age group.

The games took place in Albuquerque, New Mexico, June 14-25 with more than 14,000 competitors.

“I won every game until the last game,” Halverson said, losing to the eventual Gold Medal winner, Shirley Stein from Kansas.

“I beat her badly the first game but she took care of me in the last game,” Halverson said.

Two years ago, Halverson won the gold medal in the same event.

About a half dozen friends traveled to the tournament to cheer for her.

To qualify for this year’s national event, she competed in the state contest in Mankato.

Twice widowed, Halverson learned the game after she and her first husband moved to Arizona for health reasons. A cabinet in her Grand View Estates apartment holds shelves full of trophies she won at shuffleboard tournaments at RV parks and other places in Arizona.

The game is more popular in Arizona where participants can play on outdoor boards year-round.

Shuffleboard  players wield cues to push weighted discs across the floor, trying to get the discs to come to a stop on one of six scoring areas of the triangular board – with scoring values being 10, 8, 8, 7, 7 and 10-off (meaning if a disc lands there, it’s a minus-10 score for the player).

“There’re a lot of tricks to it,” Halverson said. “The boards are not perfectly smooth. You have to learn which way the disc goes.”

Halverson was born and raised on a farm near Hinckley.

She remembers playing sports with her brothers including hanging a basket from a granary for basketball and using a fishing pole to create a high-jump bar.

After high school, she joined the Army during World War II and served. When she was discharged, she worked in Hinckley helping veterans with benefits and insurance. She married her first husband in 1949 and the couple adopted three children. After her second husband died, she moved back to Minnesota in 2005.

Will Halverson try for a three-peat at the next Senior Games scheduled in 2021 in Fort Lauderdale, Florida?

She is not willing to commit.

“My back and legs are wearing out,” Halverson said. 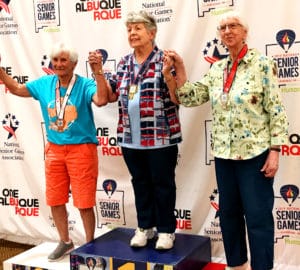