The American Legion is celebrating its 100th birthday in 2019. Profiles of St. Joseph-area veterans published in each Newsleader during 2019. The Newsleader is joining with Post 328 to recognize veterans and Legion members who served during World War II, Korea, Vietnam, Iraq, Afghanistan and other theaters of conflict and Cold War tensions.

Bob was born at home on the 120-acre farm 4 miles south of St. Joseph. He was the second oldest of five (two brothers and two sisters).

Being raised on a small farm provided opportunities for hard work. In addition to caring for the milk cows and pigs, Simon was also responsible for gathering eggs that were sold in St. Joseph. The money earned from the sale of eggs bought groceries for the family.

Simon describes his upbringing as one reflecting hard work and frugality. Living in Stearns County, not unlike many of his generation, he recalls being raised in a strong Catholic and a conservative setting. By temperament Simon was outgoing.

Simon attended a one-room country school until the eighth grade. He attended St. Cloud Technical High School, graduating in 1962 at the age of 18.

After graduating from high school, Simon enrolled at St. Cloud State University. At the time his plan was to major in accounting. Not quite ready for college, he dropped out after two quarters.

Shortly afterward, Simon enlisted in the Air Force for four years. He decided the Air Force offered “the better life.”  Boarding an airplane for the first time, Simon flew to basic training at Lackland Air Force Base, San Antonio, Texas. It was April 1963. After eight weeks of basic, he was ordered to Shepherd Air Force Base, Wichita Falls, Texas.  While there, Simon completed training in mobile communications within command centers.  Part of the training involved simulated war games.

Simon relates that after growing up in Stearns County alongside mostly white Catholics, he was exposed to the racism in the south back in 1960s. He shared a particular incident in which he and four friends went into a diner in Wichita Falls, Texas. One of his friends was black. They were five guys in uniform just wanting a meal. The black airman was told the establishment doesn’t serve blacks in spite of the fact the employees working there were black.

After schooling, Simon was assigned to Tinker Air Force Base, just outside of Oklahoma City. He became part of Third Communication Group.

In August 1965, Simon and his group were sent to Clark Air Force Base. This base, just outside of Manila, Philippines, was described by him as “large yet so beautiful.”  He was transferred to the First Communication Group. On June 15, 1991, a large volcanic eruption buried this base in several feet of ash.

Simon, now a part of a smaller detachment, was sent to Vietnam in December 1965 where he was stationed until July 1966. He spent his first Christmas away from home. As he recalls, he had steak for dinner.  A C-123 flew over the base pulling behind it a large banner that read “Merry Christmas.”

Simon’s mobile communications unit operated out of Binh Thuy Air Force Base, which was in the delta region of South Vietnam.

After six months, the group returned to Clark AFB and then was later assigned to an Air Force base in Thailand. He spent six months there before flying back to Travis Air Force Base, Oakland, California, for discharge in 1967.

With the money he saved, he bought a brand new, shiny Camaro. A year later he bought an upgraded, newer Camaro.

After leaving the Air Force, at age 22, Simon returned to St. Joseph. He enrolled at the then St. Cloud Vocation School (later known as the St. Cloud Technical and Community College.) In 1969, he completed his associate’s degree in sales management.

With the help of the G.I. Bill ($130 monthly) and living back home on the farm, Simon was able to financially manage.

While taking one class, the instructor arranged for a paid internship with a friend of his at the Northwestern National Bank (now Wells Fargo). Simon thinks he got the job because he was a veteran. In 1969 after graduation, he was offered full-time employment. He retired from Wells Fargo in 2005 as a loan officer.

Simon said he believes this was a decisive, wise and fortuitous decision on his life’s journey. He said he believes often there are people who influence the life course of others. He is eternally grateful for that particular instructor – Cornelius Votca.

With his military obligations and schooling completed and a promising career in banking, Simon succumbed to the charms of Jane. He grew up with her, rode the bus to school with her and hung out with her and their mutual friends. After a short formal engagement, Simon and Jane were married in 1969. They have been married 50 years. From this union was born a daughter and a son. They have been blessed with six grandchildren.

Now that he is retired, Simon has many interests. As he has for the last 14 years, he continues to be treasurer for  Collegeville Township. He is also responsible for the Farming Baseball Complex.

His current activities include bowling, bike trips and volunteering with St. John the Baptist Parish.

Simon is a long-standing member of American Legion Post 328 and VFW. He is proud to be an American  . . .”it’s the best country in the world”.

Simon says being in the military was a good lesson in how important discipline and team work are. 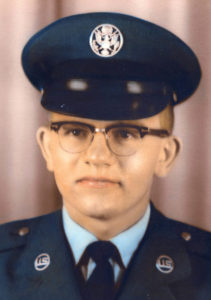 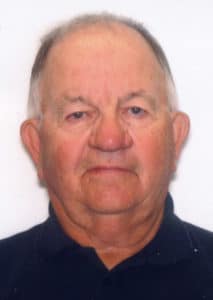