When given the chance, most people would love to be a superhero and help others by doing kind deeds.

Students at St. Joseph Catholic school recently got to be a superhero for a day on April 26.

The third annual Superhero Day event was planned in recognition of National Superhero Day and students were encouraged to make a difference together because everyone, young and old, has special powers of helping others.

Students donated $5 to dress in superhero costumes for the day. However, each child was encouraged to wear a costume, regardless of their ability to donate.

For an additional $5, students could also have a 5- by 7 -inch individual or family photo taken in their costume at the superhero photo booth.

The day included guest speaker Jackie Eiynck helping educate the third- through sixth-grade students about juvenile arthritis in the morning. The presentation also included a video and letter from a relative of a former student who is now 22 and was diagnosed when she was 4 years old.

The afternoon included superhero games and other activities for preschool- through sixth-grade students.

At the end of the day, students enjoyed superhero challenges of skipping rope, cup stacking and hula hooping. Classes previously had playoffs to determine which top two students would compete in each category.

A few students commented about the event.

“Seeing everyone’s costumes was my favorite part of the day,” said third-grader Leah Bechtold. “They were really creative.”

“My favorite was seeing the challenges at the end of the day,” said third-grader Isabella Fleege.

“I got to be in the finals for cup stacking,” said first-grader Alexander Hartman.

“I liked all the games I got to do with my friends,” said preschool student Lizzie Hartman.

About 30 parent volunteers and others participated in the event. Currently, the school has raised $1,400 that will be donated to the University of Minnesota Masonic Children’s Hospital to be used for children diagnosed with juvenile arthritis. Berg said they expect to raise $1,500.

She said the annual event gives students an opportunity to live the school’s core values of Share Generously, Serve Willingly and Care Deeply. Each student is also asked to look at their own gifts and think of how they can use these gifts to help others.

“I am so thankful for all the students and volunteers,” Berg said. “They truly carried out the school’s core values of Care Deeply, Share Generously and Serve Willingly.”

“Superhero day provides students in grades three-six an opportunity to learn about challenges other children may be facing, for all students to recognize they can be superheroes and to have fun as a school community,” Fleege said.

“We had a great Superhero Day,” Terhaar said. “Not only did the students have a lot of fun, but more importantly they learned we are all called to be superheroes by helping others in need.” 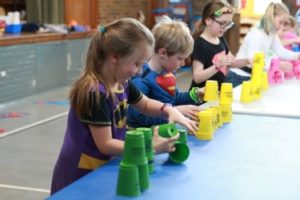