photo by Dennis Dalman Two students prepare to recite the poems in honor of military veterans during a Salute to Veterans assembly on Veterans Day, Nov. 11, at Sartell Middle School. At left is Breeze Boom; at right is Taylor Markgraf. Both are sixth-graders.

Sartell Middle School students hosted their annual tribute to military veterans on Veterans’ Day, Nov. 11, with music, poetry, guest speakers and big bouquets of thank-yous to those who served their country.

The large student choir sang a moving rendition of the song Flanders Field, a musical version of the famous poem inspired by World War I. The school band played a series of tunes in a military medley, including Taps. Sartell Mayor Joe Perske gave the students a short speech about how Veterans’ Day originated, and newly re-elected State Rep. Tim O’Driscoll of Sartell led the students in the Pledge of Allegiance.

Guest speaker was military veteran John Atchley of Royalton, who works as a coordinator of pension requests at the VA Medical Center in St. Cloud. While showing slides of his overseas duty assignments, Atchley told the students a bit about his career in both the U.S. Army and the U.S. Air Force. For several years, in the Army, Atchley worked as a medic. Later, he joined the Air Force, also as a medic.

He told the students when he was younger he had protested wars because he does not believe in war and violence. And yet, he later felt compelled to join the military because he loves his country so much. Besides, he noted, joining up was practically a personal-familial “destiny” because his family and ancestors have always served in the military, stemming all the way back to the Revolutionary War of Independence.

Atchley served in Kuwait, Iraq, Honduras in Central America and in Tunisia in North Africa. In Kuwait, in 1991, he and other medics treated wounded American soldiers, stabilizing them until they could be flown to military hospitals in Germany for recovery. He and the others worked in emergency-unit tents. When it rained, it poured for days on end, causing flooding. At times, Atchley, to get to the emergency medical tent would find himself walking up to his knees in flood water.

In Honduras and Tunisia, Atchley and others spent time training people to become paramedics. People in Honduras were so brutally poor they would walk barefoot for 10 miles or more just to get the most rudimentary medical help, such as dental work or badly needed medications for them or their ailing children. Many hungry children in Honduras attended school, often miles from their homes, just so they could get one meal a day.

A big lesson he learned from his work in those countries is people everywhere want the same things basically; they want health care, enough to eat and, most of all, they want what is best for their families.

One of his slides showed the late actor Robin Williams smiling broadly as he entertained American troops in Kuwait. Atchley, who met the actor and chatted with him for a time, commented about what a good, caring man he was.

Atchley was given a warm round of applause for sharing his experiences.

Another highlight of the Salute to Veterans event were two poems created and read by two students, both sixth-graders – Breeze Boom and Taylor Markgraf. Both have several relatives in one or more branches of the military, and so they wrote their poems as tributes to them.

Here are the poems:

This Is For You

To all the people in the Army

This is for you

To my two uncles in the Army

This is for you.

To my grandpa who was one in the nerve-wracking Navy

This is for you.

To my cousin who just joined the Navy

These people all have important jobs.

That job is to protect our country.

I wish I could be as heroic as the superheroes they are.

If it’s scary to think about friends and family leaving,

Imagine what’s going through their minds.

They have the hardest job of all

It’s hard not knowing when your mom or dad will come back.

For all the free people that protest, you are welcome,

We protect you and you are protected by the best of the best.

Your voice is loud and strong, but who will protect you?

No one standing by you.

We are your fathers, brothers and sons, out on the front line shooting the guns, we are the ones that leave behind what we own and make sure your future is carved in stone.

We are the ones who fight and die. I mean, come on, at least we try, we walked the paths to get to where we are at, and we made no other choices but to do just that.

So when you go to people to complain, take a look in the back of your mind, in order the flag you love to fly, wars must be fought and young men must die.

We have come to fight for the ones we love and hold near, if that’s not respected we would rather stay here. So please stop yelling and put down your signs, and pray for those behind the enemy lines.

Knock, knock on the door, when you come home from fighting in the war.

You see your family running down the stairs and tears are flying everywhere, they open the door and hug you tighter, tighter than they have ever before.

You eat out that night with them and have a blast, but you are very worried and scared to ever go back. That night you lay in your bed, looking at the ceiling and then it hits your head. So you run down the stairs and open the door you see the stars shining like never ever before. As you fall asleep that night a smile appears on your face, you realize you are finally home sound and safe, and you fall asleep happy knowing that you won the race. WE WON THE RACE, WE WON THE RACE!

photo by Dennis Dalman
John Atchley, a veteran from Royalton, stands beside the uniform he wore in Iraq. He also served in Kuwait, Honduras and Tunisia. He was a medic in both the U.S. Army and the U.S. Air Force. Atchley shared some of his experiences at an assembly at Sartell Middle School on Veterans Day.

photo by Dennis Dalman
Two students prepare to recite the poems in honor of military veterans during a Salute to Veterans assembly on Veterans Day, Nov. 11, at Sartell Middle School. At left is Breeze Boom; at right is Taylor Markgraf. Both are sixth-graders. 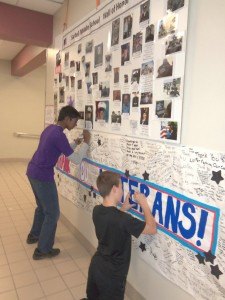 photo by Dennis Dalman
Sartell Middle School students Janagan Ramanathan (left) and Thomas Ellis sign a banner under photos of military veterans displayed in the SMS lunchroom. The photos are of veterans who are related in some way to SMS students, who invited the veterans for a free lunch at the school for Veterans Day. It was the eighth annual such event at the school.