Twins Marci and Michelle both look remarkably alike, they both have three children and they both love surprise getaway trips – so much so they have made it into a rewarding career.

Marci Turenne-Hansen lives in Sartell with her husband, Corey, and their young children Ellie, Carlie and Casey. Michelle Levin and her husband, Marty, who live in Fosston near Bemidji, have three young sons – Tanner, Ryan and Brecken.

Their company is called GirlTime Getaways, a chance for women to get away for a surprise getaway, have a good time without logistical hassles and then return home feeling happy and relaxed.

GirlTime Getaways also offers occasional “Flyaway” trips, four-to-five day jaunts to cities such as San Francisco, New York, Las Vegas, and Phoenix and Mesa, Ariz. A new flyaway city chosen by popular client votes for 2015 will be Washington, D.C. As in the bus getaway trips, the women who take flyaway trips know only which city they sign up for, but what they do when they get there are carefully kept surprises that always change, trip to trip, by Levin and Turenne-Hansen.

And lest males feel snubbed, the twins do an occasional getaway on which couples are welcome.

For many years, the twins would do college getaways with former college roommates and always had a good time.

Long before that, when they were children growing up in Thief River Falls, the traveling “bug” bit them both. Their parents, Ed and Lyn Turenne, loved to take them and their younger sister on road trips – so many through the years, the family visited or passed through all of the states except for Alaska and Hawaii.

Years later, about 10 years ago, as young mothers, they began to think how nice it would be to take some time just for themselves on a getaway once or twice a year. That wish led to a good idea – to start their own “getaway” company for other women, too.

With a nod to mortality, Turenne-Hansen said, “Tomorrow is never guaranteed: and, thus, people should take the time to smell the roses.

“Women are typically the caregivers,” she said. “They need to get a break.”

And that premise (relaxing getaway fun trips without hassles) is exactly what the twins managed to do – so successfully the company’s success has been all but achieved through word-of-mouth raves from satisfied clients. The company will be 10 years old this August.

Each trip accommodates up to 54 women, enough to fill a travel-coach bus. The buses are rented from one of three places: Voigt’s Bus out of St. Augusta, Bemidji Bus Lines or Red River Trails Bus Lines out of Moorhead.

Each year, on average, there are 12-15 getaway trips and three or four flyaway trips.

There are many Minnesota cities that are the starting points for the trips – Sartell, Fosston, Hanover, Crystal, Champlin, Ottertail, Moorhead and more. The women on the trips know only one thing when they sign up – where the bus will leave and where it will return. The trips themselves are complete surprises. Among the places and activities undertaken on previous trips were stops at wineries, breweries, specialty shops, cooking classes, dance classes, archery classes, arts-and-crafts events, paddle-boat excursions, go-kart amusement parks, pedicures, massages, dinner theaters, comedians and city festivals.

When they first started the company, Levin and Turenne-Hansen began their bus trips only from their own cities, Fosston and Sartell. But, within a few years, they would get calls from women in other cities asking if they could get enough women for a tour, could a bus possibly stop at that particular city? The twins accommodated those wishes.

The trips have taken women to major cities such as Bemidji, Duluth, Minneapolis and Stillwater. If there is something interesting and fun to do or see in Minnesota (and there are), the twins will find it. They do enormous amounts of research, planning and scheduling, as much as a year ahead, for each bus getaway and plane flyaway.

“It’s a lot of work,” said Turenne-Hansen, “but it’s worth it. We feel blessed to be able to do this.”

Usually, it’s the twins who are the springers of surprises on the trips, but during a flyaway trip to New York City in 2012, it was Marci and Michelle who got one of the biggest surprises of their lifetimes.

It happened just after the group of women enjoyed a dinner at a Brazilian-style restaurant in the city. As they exited the restaurant, Michelle and Marci stopped dead in their tracks when they saw four people leave another restaurant next door.

“I think that’s Paul McCartney!” one of the twins said.

“It is Paul McCartney!” the other said.

They quickly wondered if they should ask if they could take his photo with them. Michelle was a bit shy about it, but Marci – more extroverted than her sister, a bit bolder socially – walked up behind the famous Beatle and touched him on his shoulder. He turned around and looked right at them.

“Mr. McCartney, would you consider us getting a photo of you with us?”

“Yes, luv,” he said in his chipper British accent.

At which McCartney put his arms around the two beaming twins, and someone snapped the photo.

What is strangely appropriate about the chance encounter, though the twins didn’t think of it, is that a 1968 Beatles album and movie, both entitled Magical Mystery Tour, is based on the same premise as GirlTime Getaways – people on a surprise bus taking a mystery tour – rather in England than in the United States.

Turenne-Hansen has many fond memories of the getaway trips. She shared three of her favorites with the Sartell Newsleader.

While busing through St. Cloud during the university’s homecoming weekend, Marci noticed from the bus some college men toilet-papering what was apparently a friend’s house. She told the bus driver to stop.

Then she got off the bus and said to four college men:

“I have 54 women on that bus who can help you toilet-paper that house in no time.”

The men let out a hoot. The women deboarded the bus, and in no time they’d done the deed.

“We had a hoot,” Turennne-Hansen recalled, adding with a chuckle and a whisper how glad she was the police didn’t do a pop-in visit.

While walking down a street in New York City right near the group’s hotel, Turenne-Hansen noted a fire station.

Feeling a bit bold, she knocked on the door and asked the answering firefighter if they ever conduct tours. She told him about the 54 women on her mystery tour.

What followed was one of the most interesting tours the women ever took. There was a sadness about it, too, though, because many of the men once at that fire station were killed after the terrorist attacks Sept. 11, 2001.

“Those are great guys,” she said. “We’ve gotten to know them and consider ourselves friends.”

As their bus was going through Wadena, the women happened to see a little girl in a residential neighborhood selling glasses of lemonade roadside. They decided to stop.

She approached the girl and asked, “We have 54 ladies who would love to buy some lemonade from you.”

The girl’s eyes grew as large as lemons.

She ran out of lemonade in no time flat, but the ladies didn’t care. They gave her lemonade money anyway.

Shortly after, the girl’s mother ran out of the house. She was crying as she thanked the women so gratefully. She told them the family was trying hard to make ends meet, and their generosity and kindness had made the day.

For more about GirlTime Getaways, see its website at www.girltimegetaways.com. 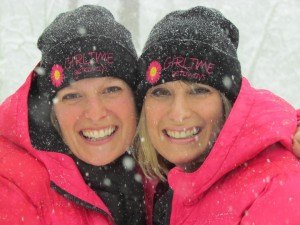 contributed photo
Michelle Levin (left) and Marci Turenne-Hansen are twin sisters who founded a successful business called GirlTime Getaways on which they – and their clients – have a blast enjoying surprises on their mystery trips.

contributed photo
Marci Turenne-Hansen (left) and twin sister Michelle Levin pause for a photo at a waterfall during one of their getaway bus trips.

contributed photo
A stunning chance encounter happened when twin sisters Marci Turenne-Hansen of Sartell (left) and Michelle Levin chanced upon Sir Paul McCartney outside of a New York City restaurant one night in 2012. It happened during one of the twins’ flyaway getaways.

contributed photo
Michelle Levin (left) and Marci Turenne-Hansen pause for a chummy photo with the Statue of Liberty rising in the background.

contributed photo
Marci Turenne-Hansen (left) and twin sister Michelle Levin normally do not dress alike, but they do on their getaway trips so their clients can easily spot them when they are all in a group. This photo was taken by the Golden Gate bridge during a flyaway trip to San Francisco.