Patriotic tunes both lively and somber seemed to float on the sunny spring-morning air on Memorial Day at Veterans Park in Sartell.

Several hundred people gathered on sets of risers and on lawn chairs to hear veterans memorialized through music and speeches.

Keynote speaker Sgt. First Class Timothy Milo reminded listeners why Memorial Day is a special day. It’s because of the sacrifices, including the ultimate one – loss of life – that so many soldiers made so the United States could have a country free of tyranny, slavery, fascism and terrorism, Milo said. Those sacrifices date all the way back to the nation’s founding when Minutemen were the country’s first “army.”

Milo is a trainer for the National Guard and works out of Camp Ripley. Highly decorated with honors, he has served multiple tours of duty in Iraq and Afghanistan.

Milo paraphrased famed Vikings football coach Bud Grant, who said there is a big difference between the stars he’s known and the heroes. Heroes, he said, go willingly somewhere else to fight for and protect their country. Too much fuss, Grant said, is made of stars, not enough gratitude is given to heroes.

Milo also quoted General George Patton who once said of soldiers who died in combat, “Let us give thanks that men like this once lived.”

“Today is not about us; it’s about them,” Perske said, referring to veterans past and present, departed and living.

The American Legion of Sartell, as it has in many previous years, hosted the ceremony, posted the colors and helped Sgt. Milo place a wreath. Legion member Rollie Weis memorialized his brother, Phillip, who was killed during the Battle of the Bulge in northern Europe in World War II. Weis himself served in the U.S. Navy during that war and is one of the few surviving World War II veterans.

Sartell American Legion Commander Flip Mastey read a prayer, giving thanks to all veterans in the nation’s history.

State Rep. Tim O’Driscoll (R-Sartell), who helped start the Memorial Day ceremony in Veterans Park 10 years ago, emceed the program. He noted there are 400,000 military personnel buried in Arlington Cemetery, on land once owned by Gen. Robert E. Lee, who lead the Confederate forces in the Civil War. Why do people continue to enlist to serve their country?, O’Driscoll asked.

For his answer, he quoted from the Pledge of Allegiance. “One nation under God, indivisible, with liberty and justice for all.”

After the playing of Taps, the audience gathered for some light refreshments and conversation.

photo by Dennis Dalman
The American Legion Rifle Squad of Waite Park stands at the ready, waiting for the Memorial Day ceremony to begin in Sartell’s Veterans Park. 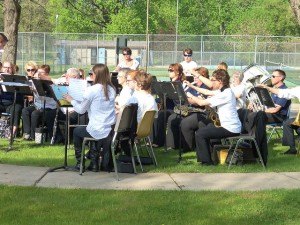 photo by Dennis Dalman
Members of the Sartell Area Community Band prepare to play a medley of patriotic tunes during the Memorial Day ceremony in Veterans Park, Sartell.

photo by Dennis Dalman
People sit in the risers waiting for the Memorial Day ceremony to begin in Veterans Park, Sartell. David Peterson and Amy Braig-Lindstrom, both Sartell City Council members, can be seen in the background, right, with their arms raised.

photo by Dennis Dalman
Sartell Boy Scouts and Girl Scouts placed little American flags along the walkways after the Memorial Day ceremony in Sartell. In this photo, the boys are preparing to say the Pledge of Allegiance.

photo by Dennis Dalman
Rollie Weis, a World War II veteran who grew up in Sartell, addresses the audience during the Memorial Day ceremony in Veterans Park. To the left of Weis are members of the American Legion of Sartell. To the right, standing, is State Rep. Tim O’Driscoll (R-Sartell), who emceed the event.