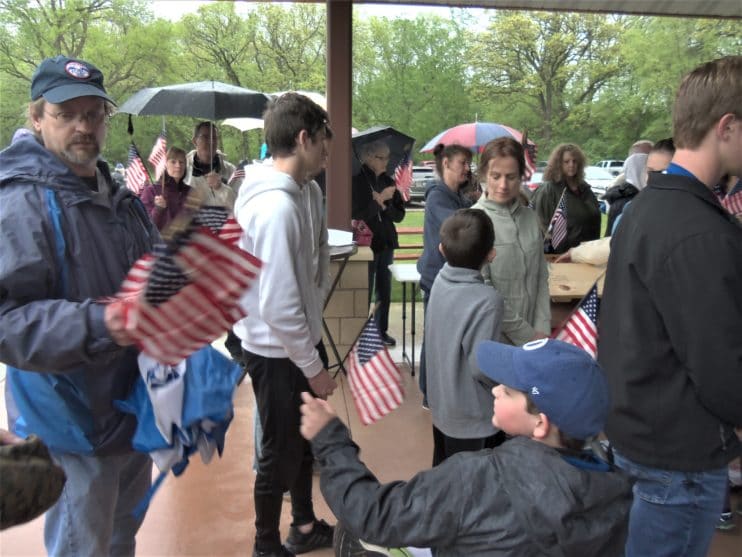 Blustery winds blew, a drippy rain fell, a chilly temperature caused some shivers, but the nasty weather did not dampen the patriotic spirits of the 150 or so people who attended the Memorial Day ceremony in Sartell.

The ceremony had been planned, as always, for Veterans Park, but the cold rain caused planners at the last minute, shortly before 9 a.m., to change the venue to beneath the Watab Park picnic shelter across the street from Veterans Park.

The ceremony was noteworthy for numerous speeches, several prayers, bagpiper Ben Richason, a reading of the poem “Flanders Field,” and patriotic songs performed by the Sartell High School Marching Band. After the laying of the wreath, a gun salute and the playing of “Taps,” many enjoyed free donuts and refreshments served by members of the American Legion of Sartell.

The following are several highlights from the speeches:

Jeff Schmitt of Sartell is a member of the Minnesota Air National Guard and serves as a flight medical technician. Recently, he served in the mideast country of Qatar helping evacuate by air wounded military personnel from Afghanistan, Iraq and other  conflicts.

Schmitt credits his own family’s military heritage and in particular younger brother, David, for inspiring him to enlist in the Guard six years ago. David was deployed to two war zones twice, once in Afghanistan, once in Iraq. Schmitt noticed David’s military service had instilled in him self-worth, self-confidence and the “unmistakably pure passion of a soldier’s heart.” Time and again, he noticed those qualities in military personnel he met while working in Qatar.

“I met so many brave, patriotic and selfless individuals,” he said. “Their dedication is to serve (this country).”

Everyone, Schmitt said, knows veterans living or veterans passed on. His grandfathers served in the military, a cousin is now serving in the U.S. Navy and a great uncle lost his life in WW II.

“It takes a toll on families and brings hardships,” he said. “Thank Almighty God and those who served and paid a debt that shall never be forgotten.”

Many returning veterans will face challenges in adjusting to life back home, and many will face the challenges of hidden wounds, Schmitt said. They should be helped and honored, he added, in words and actions. One way to honor veterans, Schmitt said, is to volunteer in communities and help those in need. In that way, he explained, people will be strengthening what veterans fought for – American freedoms.

Sartell Mayor Ryan Fitzthum recalled how he used to hear his father and others talk about wars such as World War II and Vietnam. But what struck him most personally about war was when he was a 10th-grader at Sartell High School when suddenly, on Sept. 11, 2001, he heard about a plane crashing into a tower of the World Trade Center in New York City. That is when he began to wonder about the future. But since those terrorist attacks, he added, there have been many conflicts and so many sacrifices of American military personnel who understand the importance of defending freedom.

Sen. Jeff Howe (R.-Rockville) was a longtime member of the Minnesota Army National Guard who retired with the rank of lieutenant colonel. He served several tours of duty in war zones overseas. He was re-elected several times to the Minnesota Legislature and most recently won the 2018 election to the Senate District 13 seat (formerly served by Michelle Fischbach of Paynesville).

Howe and his wife, Sheri, visited the French countryside of Normandy, France, where the D-Day invasion took place June 6 nearly 75 years ago. From across the English Channel, British and American troops stormed ashore on the beaches of Normandy to rout the German Nazi occupiers of France who had gun emplacements all along the cliffs above the beaches.

Howe said he and wife Sheri walked those vast beaches, at low tide, and they realized powerfully what sacrifices were made by so many soldiers, most of whom became sitting ducks for the Nazis who blasted them with a hail of bullets.

“We must never forget (those who sacrificed),” Howe said. “They’re not gone unless they’re forgotten.”

Such heroes, he added, remind us never to abandon the cause of freedom, and those sacrifices, he noted, should remind all of us to honor and to help service members and their families.

Tim O’Driscoll, former Sartell council member and mayor, is the one who started the highly successful Memorial Day ceremonies in Veterans Park, Sartell.

A life-long Sartell resident, O’Driscoll went on to be re-elected multiple times to House District 13B. For years, he has been a passionate advocate for veterans.

In his speech, O’Driscoll referred to a famous TV commercial from the 1950s in which he said the late Doris Day (actually it was Dinah Shore) sang the jingle, “See the U.S.A. in your Chevrolet.” That ad, said O’Driscoll, is an example of how America has always had a love affair with the automobile.

Since the 1950s, there have been wars and more wars, bigger bombs and bigger problems. Using his metaphor of Americans’ love of cars, O’Driscoll suggested Americans, when problems arise or duty calls, don’t waste time looking in the rear-view mirror but look straight ahead through the windshield to face the challenges head on. 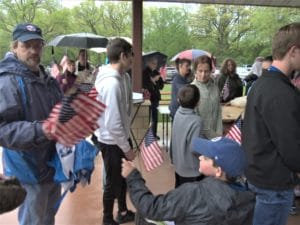 photo by Dennis Dalman
Under the picnic shelter of Watab Park, people wave flags during the end of the Memorial Day ceremony. The even had to be moved from Veterans Park to the shelter because of inclement weather. About 150 people attended the service. 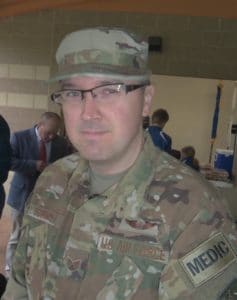 photo by Dennis Dalman
Staff Sgt. Jeff Schmitt of Sartell was one of the key speakers at the Memorial Day ceremony in Sartell. 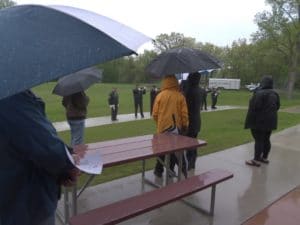 photo by Dennis Dalman
A gun salute (background) is fired at the end of the Memorial Day ceremony in Sartell.