contributed photo Chase Rajkowski proudly stands next to a photo of his father, Ron, at a "Road Workers Memorial Event" in the Twin Cities. Ron was killed when a driver veered into him and a co-worker when they were working in a construction zone. Ron's wife, Jodi, was instrumental in getting stricter laws passed regarding work-zone driving violations.

Jodi Rajkowski of St. Joseph is hoping with all her might that a stricter work-zone traffic law will prevent roadway workers from being killed the way her husband was three years ago.

Rajkowski is proud of the new law, which she helped push for.

“It’s good,” she said. “Good. Good. We played a part in it, and I think it’s a start. It might not stop people from doing it (speeding in work zones), but it will make them more aware and hold people accountable for their actions.”

Ron Rajkowski, 44, died Oct. 13, 2011 when a car veered off the road and killed him and a fellow worker, Craig Carlson. Both employees of the Egan Co. in Minneapolis, the two men were doing some work just off of a road-reconstruction project near the Twin Cities. The man who hit them was from another state. He said he was adjusting his cruise control when his car veered to the left and, overcorrecting his steering, he caused the car to veer off the road, hitting and killing Carlson and Rajkowski.

Rajkowski’s tragic, sudden death left his wife a widow and his two boys fatherless. Blake is now 11; Chase is 8.

The new law requires posted signs saying that exceeding the posted speed limit in work zones will be punishable by a fine of a minimum of $300. Research by the Minnesota Department of Transportation has shown that signs saying “fines will be doubled” in work zones have little or no effect on many drivers, many of whom tend to mimic other drivers who are driving too fast through the zone.

Since 2010, Minnesota has had 31 fatal crashes in work zones, with six of the victims roadside workers. Last year, there were 1,740 work-zone accidents, eight of them fatal ones.

The new law, which went into effect Aug. 1, is the first change in work-zone laws in 15 years.

The law also states if road or roadside workers are present and one lane or part of the traffic flow is closed down for more than 24 hours, the work-zone speed limit will be lowered to 45 mph. Also, those drivers who ignore directions given by road workers controlling traffic can be fined a minimum of $300. Agencies can reduce work-zone speeds, depending on conditions, any time they think it appropriate.

Before the new law, fines for violations in work zones varied from $50 to $200-plus, depending on the county. The average fine for a work-zone speeding violation last year was $212, according to MnDOT.

Rajkowski is haunted by how her husband used to complain how many drivers would speed through work zones, oblivious to the obvious dangers and in some cases killing road workers or fellow motorists. Just a week before Ron was killed, he told her he probably wouldn’t live past the age of 50 the way some thoughtless and reckless motorists drive. Tragically, a week after making his sad prediction, his prediction proved to be all too true.

Last year, Jodi, and Janet Carlson, the widow of the other man who was killed, joined with others and appeared to testify at hearings in the Minnesota House, in favor of a stricter bill.

Jodi credited many others for their expertise, organization skills and time invested in tightening the law. They include Associated General Contractors of Minnesota; the Egan Co.; State Rep. Ron Erhardt (DFL-Edina), who is chair of the House Transportation Policy Committee; and Lisa Raduenz of the Twin Cities, who had done a lot of work related to transportation issues and who befriended Jodi, and Janet Carlson.

Many roadway workers Jodi has talked with remark about how, at the sound of squealing tires, they and others will jump with fear and quickly look up from their work, expecting to be hit by a vehicle.

“I’m hopeful this (new law) will make a statement,” she said. “It’s frightening to think all that separates workers from speeding drivers is just a bunch of orange cones.” 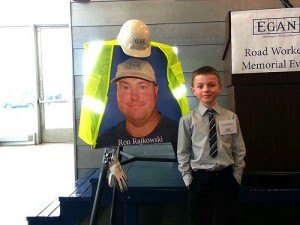 contributed photo
Chase Rajkowski, 8, proudly stands next to a photo of his father, Ron, at a “Road Workers Memorial Event” in the Twin Cities. Ron was killed when a driver veered into him and a co-worker when they were working in a construction zone. Ron’s wife, Jodi, was instrumental in getting stricter laws passed regarding work-zone driving violations.

contributed photo
During a memorial for deceased road-construction workers, the Rajkowski family of St. Joseph is greeted by Minnesota Gov. Mark Dayton. At left in the photo is Jodi Rajkowski, widow of Ron Rajkowski, and their two children – Chase (foreground) and Blake. Their father was killed, along with a co-worker, by a car in a work zone near the Twin Cities.

Market vendor grows everything from A-Z

Market vendor grows everything from A-Z