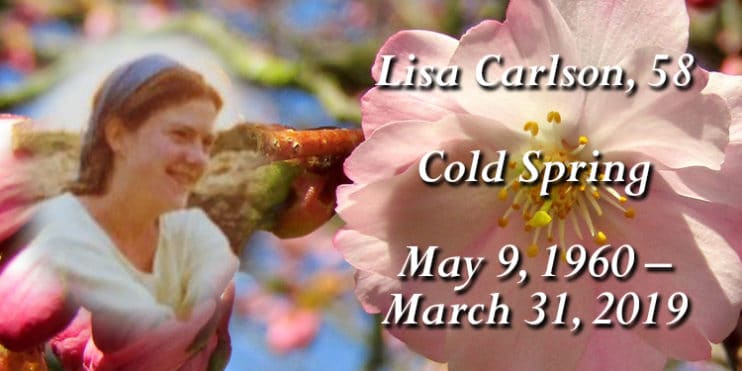 Carlson was born on May 9, 1960 in Minneapolis to parents Barb and Lauren Carlson. She grew up in Chokio, Minnesota as the second of eight siblings whom she helped raise. She graduated valedictorian from Chokio-Alberta High School. She was married to Patrick Cotton of St. Joseph for 22 years and had four children who all remember her as the best mother.

She went back to school while raising four young children and earned her bachelor’s degree from the College of St. Benedict and her masters’s in ceramics from St. Cloud State University. Her children admirably remember her writing her thesis on a typewriter, in the middle of the kitchen, while they ran circles around her. Carlson excelled at everything she devoted herself to: she was an amazing whole-foods cook and avid gardener. She grew large, organic vegetable and flower gardens every year and was a vendor at St. Joseph’s Farmers’ Market for a few years. Carlson was a lifelong artist and leaves a substantial body of work behind her. Her primary medium was ceramics and also included drawing, painting, photography, printmaking and poetry. She ran the art galleries as the Director of Exhibitions from 1996-2007 at College of St. Benedict and St. John’s University. She was a ceramics instructor at the Paramount Arts Center in St. Cloud from 1998-2012. She also spread her love of art through her teaching positions: running figure-drawing classes for the St. John’s and St. Ben’s community, summer art kids’ camps at St. John’s, K-12 educator workshops at the Paramount and other various art workshops and guest speaking appearances.

She is preceded in death by her brother Daniel Carlson of Chokio.

Survivors include her parents Lauren Carlson of Chokio, Barb Eide and her husband Jerry Eide of Montana; her siblings: Louis Carlson of Oregon, Thomas Carlson of St. Joseph, Anne Stahn of St. Paul, Katie Bergstrom of St. Paul, Peter Carlson of Minnestrista and Molly Carlson of Wayzata; her children: Jessica Cotton of Hawaii, Robin Cotton of Minneapolis, Lauren Cotton of St. Cloud, and Daniel Cotton of Cold Spring; and her granddaughters Evelyn Cotton and Wiley Rupp.

She represented the ultimate Earth Mother to so many. Her legacy of love lives on: love of the Earth, love of art, love of life.

Charitable contributions can be made in memory of Lisa Carlson to Brain Support Network, P.O. Box 7264, Menlo Park, California 94026 or www.brainsupportnetwork.org.