According to Advocates for Health, sudden cardiac arrest is the leading cause of death in our country and claims about 350,000 lives each year. It kills 1,000 people per day or one person every two minutes and about 95 percent of victims die before they reach the hospital or other emergency help.

These are some of the reasons why local resident Bruce Bechtold recently started an initiative to get automatic external defibrillator (AED) SaveStations installed around the Pleasant Acres neighborhood near St. Joseph.

AEDs are portable machines that are used to deliver electrical shocks through the chest to the heart to people who have suffered a sudden cardiac arrest.

An AED SaveStation is a place where an AED is installed in a temperature-controlled and monitored box.

People can access AEDs at SaveStations when a sudden cardiac arrest occurs. In such a crisis, people helping the victim should immediately call 911 and begin cardiopulmonary resuscitation. The AED can be used to shock the victim’s heart into beating again. When first responders arrive at the scene, they can then take over to help the patient.

Bechtold was employed by the Stearns County Sheriff’s Office for 32 years, the last 14 as the chief deputy. During those years he said he performed cardiopulmonary resuscitation on several people but noticed after the introduction of defibrillators in the hands of first responders, the number of lives saved increased.

Bechtold said when he was working for the Sheriff’s Office he had a defibrillator assigned to his squad car and brought it in his house at night.

“It felt comforting to know I had that device that I could help my family and neighbors if the need arose,” Bechtold said. “After I retired, I no longer had that bit of ‘insurance’ around anymore.”

After reading several articles in the St. Joseph Newsleader about the SaveStations in St. Joseph, he said he felt his rural neighborhood could really benefit from them.

“We have exceptional first responders (sheriff’s deputies and St. Joseph Fire/Rescue), but given our location, the response time is longer,” he said.

Bechtold reached out to Advocates for Health and began working with them. He said they are a great resource.

He also contacted his neighbor and cousin, Mark Hilsgen, to see if he would be willing to help.

“Mark was very eager to help since his life was saved by a defibrillator,” Bechtold said.

Hilsgen experienced a sudden cardiac arrest in church on Oct. 17, 2010, and was saved by other parishioners (many of who are trained medical professionals) who administered cardiopulmonary resuscitation and used an AED to shock his heart.

Hilsgen was fortunate St. Joseph First Responder Justin Honor still had an AED in his vehicle because he had taken an AED course the night before and hadn’t yet returned the AED to the police station.

Hilsgen said he is very supportive of the SaveStations.

“It saved my life,” he said. “If there wouldn’t have been an AED available, I wouldn’t be here. I’m all for them being located closer to people to save lives.”

Betty Pundsack, who has been a teacher at St. Joseph Catholic School for more than 40 years, also experienced a sudden cardiac arrest on April 10, 2017, while at work and shared her story.

She said she has no recollection of the events, but she has been told that after she collapsed while talking to another teacher, that teacher called 911 and asked for help. Three former second-grade-students of Pundsack’s, who were members of the St. Joseph Fire and Rescue squad and were dropping off their children, assisted and started cardiopulmonary resuscitation. Two medical professionals were also dropping off their children at school and administered the AED, which Pundsack had collapsed underneath.

Pundsack said she was transported to the hospital and remained there for 10 days.

“I am totally in awe of the circumstances and outcome and the heroes who assisted me onsite, in transit and at the hospital and humbled by the fact I survived,” Pundsack said. “The AED truly saved my life.”

Bechtold said his initial idea was to install one SaveStation in a central area in the Pleasant Acres area (he and Hilsgen do not live in Pleasant Acres but live close to the area). The Advocates for Health group suggested four stations to more adequately cover the area.

Bechtold said they hope to have residents install the SaveStations on their garages in certain geographic areas to maximize the benefit and reduce the response time.

“We are hoping to raise $14,000 to cover the four wall-mount stations, which includes signage and a maintenance agreement,” Bechtold said.

Bechtold said they hope to obtain many donations of any amount but larger donations will help achieve the goal of four stations.

“A contribution of any amount will be appreciated and go as an investment in ourselves, our families and our neighbors,” he said.

They would also appreciate having more residents helping with the task of home visits since the neighborhood is large and sprawling.

“The more people involved, the more efficiently we can get the word out,” he said.

Or checks can be written to Advocates for Health. A receipt will be mailed with any donations made by check or cash.

Advocates for Health have applied for CentraCare grants to donate the defibrillators.  The money raised will be used to purchase the climate-controlled SaveStations.

Bechtold grew up in the St. Joseph area and he and his wife, Pat, have lived in the Pleasant Acres area for 29 years. They have four adult children. Their son, Sam, is married to Carrie and they have one son, Bodie.  Their daughter, Mary, is married to Blake Bellefeuille, and their other two children are Ted and Kate.

Hilsgen grew up in St. Cloud. He and his wife, Lisa, have lived in the Pleasant Acres area for 27 years. They have twin daughters, Amber and Allie. 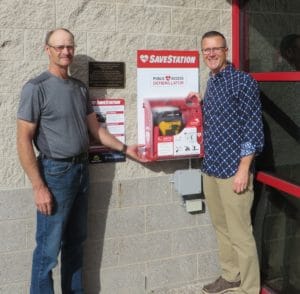 photo by Cori Hilsgen
Local residents (left to right) Mark Hilsgen and Bruce Bechtold stand by a wall-mounted AED SaveStation, located at the St. Joseph Community Fire Station, which was donated in memory of Ken Twit, by his wife, Audrey. Bechtold and Hilsgen are part of an initiative trying to raise funds to install four SaveStations around the Pleasant Acres area of St. Joseph.