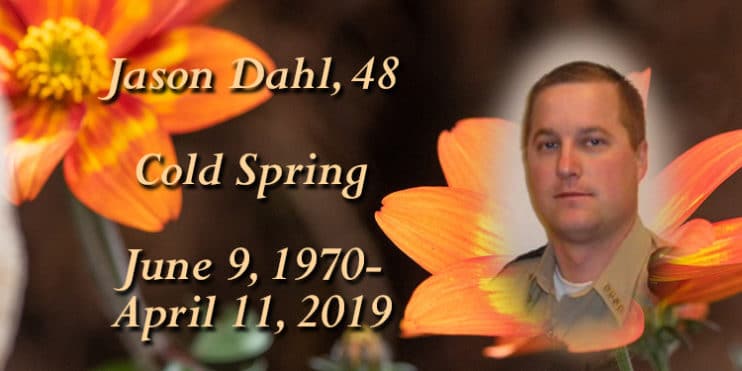 Jason James Dahl, 48, of Cold Spring, Minnesota, died peacefully, at home, surrounded by family on April 11. Dahl was diagnosed with non-Hodgkin’s lymphoma on July 20, 2018, which he battled fiercely during his cancer journey.

Dahl was born June 9, 1970 to Elmer and Geraldine (Fuchs) Dahl. He graduated from Paynesville High School in 1988 and then obtained his law enforcement degree from Alexandria Technical College. In 1992, he enlisted in the U.S. Air Force and served until he was honorably discharged in 1997. Dahl was married to Patricia Melton on Feb. 7, 1995, and they were blessed with two amazing daughters, Ali and Payton. Dahl started his law enforcement career with the City of St. Joseph and then served at the Stearns County Sheriff’s Department for nearly 20 years. He had a strong desire to help others, whenever possible. Above all, he was the proudest of his family. He shared a great love for his parents, siblings, daughters, sons-in-law and grandson, Bennett. Dahl had a large circle of family and friends. He enjoyed neighborhood parties, hunting, fishing, golfing, motorcycling, snowmobiling, spending time on the lake and Wednesday Wing Night at The Red Goat in Watkins.

A special thank you to Dr. Hani Alkhatib, Siri K., RN, the Coborn Cancer Center, St. Cloud Hospital and Mayo Clinic and Hospitals for their kind and compassionate care.