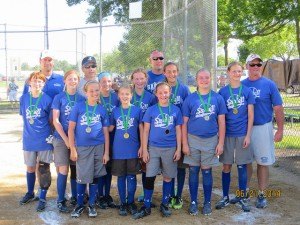 Grace Kuhl, Sartell-St. Stephen High School, is the recipient of a health education scholarship from PineCone Vision Center, Sartell. Students are selected for this scholarship based their academic excellence, volunteerism and desire to pursue a degree in medicine.

Array Services Group with its three innovative business units, CareCall, ProSource and J.C. Christensen and Associates, has invested in a company garden to promote wellness among its employees. The garden is located on the Array campus and is being tended by employee volunteers who helped plant, and are now weeding and watering it on a regular basis. Produce from the garden will be donated back to employees of Array.

“The idea came from our company’s wellness committee,” said Greg Bockrath, wellness coach at Array. “We’re excited about our garden. It’s a great way to encourage healthier eating; it can help alleviate stress; and it shows people how easy and fun it can be to get outside and do some gardening.”

Volunteers planted tomatoes, green peppers, carrots, radishes and green beans, to name a few, in a 4-foot by 16-foot garden plot. While not very big, if this year’s garden is successful, there are plans to expand the garden so more vegetables can be grown and more people can participate in caring for it.

When asked what will make a successful garden, Bockrath replied, “If people continue to contribute to this effort; if the garden thrives; and if people are having fun with it, it’s a success and we will continue to support it.”

Fitness challenges and activities designed to help employees keep active, motivated and reduce stress are common at Array and on-site gym equipment help employees save time and money by working out at work. A garden is just one more way Array has chosen to promote wellness among its employees.

Erinn Miles of Sartell was recently named to spring dean’s list at Providence (RI) College. Miles is a member of the Sartell-St. Stephen High School Class of 2016. To qualify, students must achieve a minimum 3.55 grade-point average.

Ten Sartell students were recently named to the dean’s list at the University of Minnesota, Twin Cities.

To qualify for the dean’s list, a student must attain a minimum 3.66 grade-point average.

Ryan DeRoeck, of Sartell, earned a bachelor’s degree in elementary education with a minor in mathematics from the University of Minnesota, Morris.

To earn this honor, students must achieve a minimum grade-point average of 4.0.

To earn this honor, students must achieve a grade-point average of 3.5 to 3.9.

Tamara Hagerty, of St. Stephen, was recently named to the president’s list at St. Cloud Technical and Community College. To earn this honor, students must achieve a minimum grade-point average of 4.0.

Isaac Popp, son of Marie and Ted Popp of Sartell, recently graduated with an agri-business degree from Ridgewater College in Willmar. He is currently national vice president to the Post-secondary Agriculture Student organization and is a Phi Theta Kappa honor member.