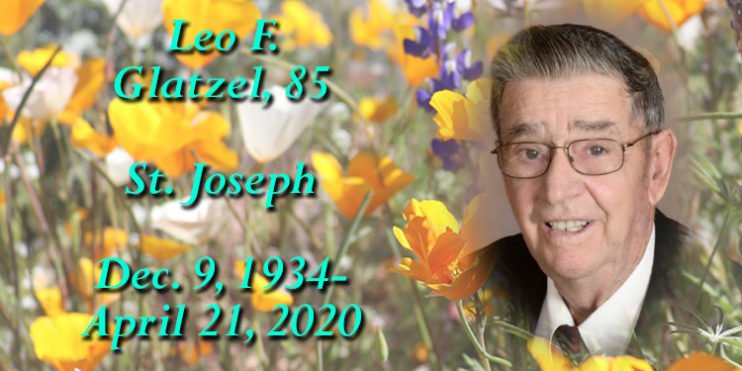 Leo F. Glatzel, 85, of St. Joseph died peacefully at home, surrounded by family, on April 20 after a long battle with kidney disease. Funeral services will be held at a later date due to COVID-19.

Glatzel was born Dec. 9, 1934 in St. Joseph to Frank and Anna (Horsch) Glatzel. He attended St. Joseph Catholic School. He married Theresa Theisen on June 13, 1961 at St. Paul’s Catholic Church in St. Cloud. He farmed, was a rural mail carrier and drove buses for Trobec’s Bus Company for 42 years. He was an active member of St. Joseph’s Parish where he served as an usher for 60+ years and a Eucharistic minister for 38 years. He was also a charter member of the St. Joseph Knights of Columbus Council #7057 for 41 years and a member of the Moose Lodge #1400 and the Catholic Order of Foresters.

Glatzel’s love for farming was his life. He was born, raised and died on the home farm. He always enjoyed caring for his animals, discussing local history and teaching his grandchildren the value of working hard. He will be remembered as a loving husband, father and grandfather who told the best stories and jokes and who always made you smile.

Survivors include the following: Theresa, his wife of 58 years; children: Mark of St. Joseph and his significant other Laura Imdieke, Alan (Caroline) of St. Joseph, Jean (Tony) DeGross of Minneapolis; five grandchildren: Riley and Maria Glatzel, Theresa, Lydia and Jacob DeGross; brother-in-law, Gene (Karen) Theisen; and many nieces and nephews.

He was preceded in death by his parents; and siblings, John, Mary Stang, Rose Gornik and Margaret Raupp.

A heartfelt thank you to CentraCare Hospice.