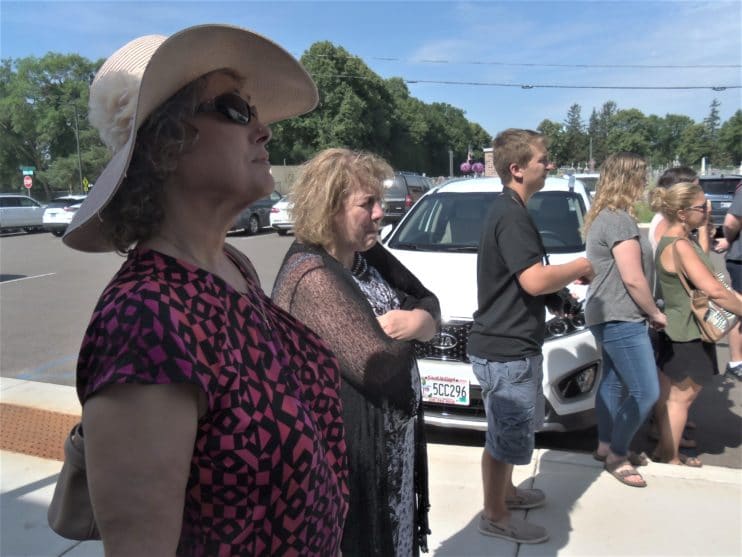 After 33 years of service for the city of St. Joseph, city administrator Judy Weyrens retired July 12 with a feeling of deep satisfaction.

“It was a lot of work, but I got a lot of enjoyment out of the job, and I’m proud of being a part of what St. Joseph has become,” she said.

City employees hosted an open house for the public and a send-off party for Weyrens July 12 at the St. Joseph Government Center.

“It was very nice, a lot of fun,” Weyrens said.

Employees gave her a variety of gift certificates.

Reviewing her many years of work for the city, Weyrens said St. Joseph is a city that is the “best of both worlds.” It is, she said, so unique in that it’s a city with a small-town ambience and yet is near the big city of St. Cloud, the Twin Cities via the freeway and three major colleges in the area. Throughout history, many influences became intertwined to shape St. Joseph: German immigrants, St. Benedict Monastery, the College of St. Benedict, nearby St. John’s University, arts, crafts, cultural productions, the growth of business and industries, residential developments, the annual Fourth of July events and an overall mixture of the old and the new, the traditional and the modern.

The demographic profile of St. Joseph has become younger with every passing year, Weyrens noted. There are more and more younger families with younger children that energize the city.

“And students too,” she said. “I really think students have brought a lot of excitement to the city.”

Weyrens said the most challenging part of her job – and everyone’s jobs – was to manage growth and stay within budget constrictions. That was not always easy, especially considering the city is one of the three or four top cities in the state for the large amount of its tax-exempt properties (the college, for example).

But Weyrens said thanks to the frugal habits of staff and City Council members throughout the years, St. Joseph managed to grow despite budgetary constraints.

“The staff (was) always looking for used equipment to buy to save money,” Weyrens said. “We’ve always had a really good staff that worked together well.”

Being an administrator is a kind of balancing act, Weyrens noted. Throughout the years, there are always new people elected to the council and new or slightly altered directions and emphases with each council.That requires a lot of tweaks, shifting of gears and coordinative efforts.

In the St. Joseph administration, the number of staff members is six, including the city administrator. The total city staff, all departments, is 22 full-time employees and 30 paid-per-response firefighters.

When Weyrens began her job, back in 1986, the population of St. Joseph was about 3,000. Today, it’s about 7,400, which includes some college students who live in residential areas. Thirty-three years ago, there were about 900 households, which has since doubled to the current 1,800.

Along with the growth and so many positive developments there came two tragic shocks to the city. One was the abduction of 11-year-old Jacob Wetterling, a case that wasn’t solved until nearly three decades later when his killer confessed to the crime and his body discovered buried near Paynesville. Another tragedy was the murder of St. Joseph police officer Brian Klinefelter, shot to death after he made a traffic stop in the city on CR 75.

On a personal level, another shock happened when Weyrens discovered she had breast cancer in 2014. It was a tough struggle, with bouts of chemotherapy, but she kept working at her job through the entire ordeal because she wanted to keep busy, to stay connected, not wanting to succumb to any feelings of depression or hopelessness. She said she was overwhelmed with all of the support from the people of St. Joseph during her health crisis.

What she enjoyed most about her job is the number of people she had a chance to meet and/or to work with.

“I enjoy the people of St. Joseph and I always liked the variety of the work I did,” she said. “I learned so much and met a lot of people. I have a lot of friends here. It was a great place to work.”

Weyrens was raised in St. Joseph at the corner of Minnesota Street and Second Avenue. She is the daughter of Hugo and Rita Weyrens, who now live at the St. Benedict Center in east St. Cloud. Longtime avid gardeners, they now do their gardening in Judy’s yard at her residence in St. Cloud. She is the fourth of five siblings – three girls, two boys.

Weyrens attended St. Joseph Lab School, graduated from Cathedral High School, then attended the College of St. Benedict and St. Cloud State University. She then enrolled in Concordia College, St. Paul, where she earned a bachelor’s degree in organizational business and management and also a master’s degree in that field.

She was an auditing sales employee at Herberger’s in downtown St. Cloud when she heard of an opening in administration in St. Joseph. At first, in 1986, she served as a secretary, then as finance director from 1988 until 2000, when she was named city administrator.

“Oh yes, humor is important,” she said. “I always compare myself to an ice cube in a glass. I want to be the positive person on the top of the liquid in a glass.” 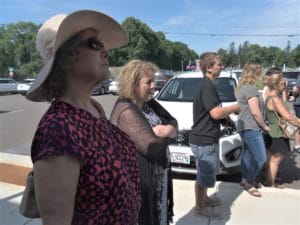 photo by Dennis Dalman
On July 12, the morning of her last day of work, Judy Weyrens (second from left) listens to a tribute to St. Joseph resident Audrey Twit, who donated $11,000 to the City of St. Joseph to purchase four automated external defibrillators. Twit happens to be Weyrens’ good friend. Just hours later, the city hosted an open house and send-off party for Weyrens, who served the City of St. Joseph for 33 years, 18 of them as city administrator.