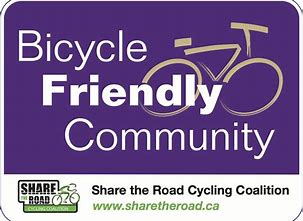 Sartell is now officially a Bicycle Friendly Community, one of only 29 cities in Minnesota to be so honored and one of 464 in the nation.

At the June 10 city council meeting, the city was honored with a Bicycle-Friendly Community certificate (bronze level) by Dorian Grilley, executive director of the Bicycle Alliance of Minnesota.

The only city in the state to achieve a gold level is Minneapolis. Grand Marais, Hennepin County and St. Paul all earned silver-level honors. The rest of the 29 cities, which includes St. Cloud and now Sartell, are all in the bronze category.

“You’ve done a wonderful job here,” said Grilley, noting how Sartell has taken steps to make bicycling in the city accessible to everyone via a network of trails and how schools and the city have encouraged people to enjoy safe and fun bicycling. He also praised the Bike Rodeos that are held in Sartell to teach young people bike safety skills. Ongoing educating of people about the health, safety and fun of bicycling is one of the main qualifications for becoming a Bicycle-Friendly Community.

Grilley mentioned some interesting facts about biking. For example, people who bike just three times a week can reduce their chances of serious heart problems by half.

The Sartell city councils for at least two decades have consistently encouraged biking-hiking trails throughout the city in developments, parks and along city streets.

In fall 2017, Sartell submitted an application to be designated a Bicycle Friendly Community. The city was given an honorable mention and recommendations that included installation of three bike-repair stations, the launching of a Bike-to-School event and adoption of a Complete Streets policy. Thanks to grants from the Statewide Health Improvement Program, those recommendations were achieved. The Bike-to-School event, held in late May in Lions Community Park, was a great success, with about 400 people attending.

In winter 2018, the city re-applied for the Bicycle Friendly Community designation, and it was successful.

Now, the city is encouraged to install Bicycle Friendly Community road signs throughout the city. Grilley said such signs are the equivalent of an advertisement that says, “This city is a great place to live for family and for businesses.” 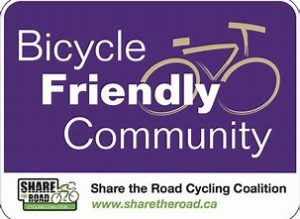 contributed graphic
Sartell will soon install “Bicycle Friendly Community” street signs in the city to let people know the city has been designated with that honor by the Bicycle Alliance of Minnesota.