UPDATE 7:44 p.m.: The State Patrol is reporting that a suspect is in custody after a daylong manhunt near St. Joseph on the campus of St. John’s University.
Devan Dajon Wilson, 29, was arrested without incident at around 6:30 Thursday evening near Sagatagan Lake on the campus of St. John’s University.
The manhunt began just after 7:30 Thursday morning when Wilson assaulted a State Patrol trooper during a traffic stop and DWI investigation on I-94.
After a vehicle pursuit, Wilson fled on foot near St. John’s University. The State Patrol trooper who was assaulted suffered multiple fractures to his jaw which requires surgery. The surgery is scheduled for Friday, Nov. 20.
No force was used when Wilson was taken into custody. Wilson was transported to St. Cloud hospital for observation and will be booked into the Stearns County Jail when released. 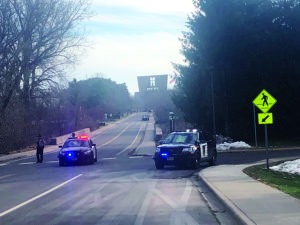 Law enforcement from the St. Joseph and St. Cloud Police Departments, Stearns County Sheriff, and State Troopers had Saint John’s University and Prep School campus on lockdown for several hours as they searched for a suspect who fled a traffic stop after punching the trooper.