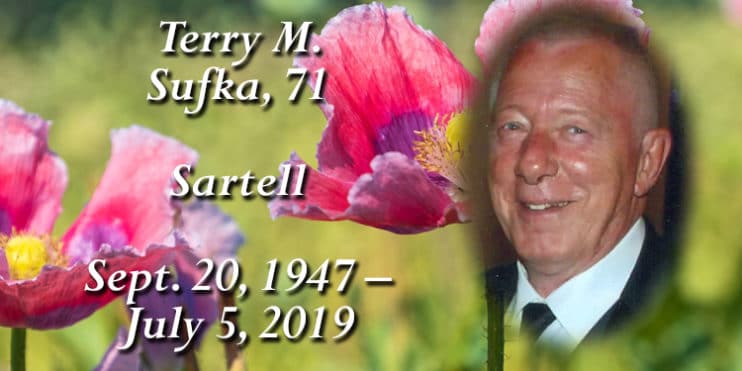 Terry Sufka, of Sartell, died July 5 in St. Cloud Hospital. His funeral will be held at noon Friday, July 12 in St. Francis Xavier Catholic Church, 219 Second St. N., Sartell. The Rev. Tim Baltes will officiate and burial with full military honors will be in the parish cemetery. Visitation will be from 10 a.m. to noon Friday at the gathering space at St. Francis Xavier in Sartell. Arrangements have been entrusted to the Williams Dingmann Funeral Home in Sauk Rapids.

Sufka was born Sept. 20, 1947 in St. Cloud to Nicholas and Dorothy (Braun) Sufka. He grew up in the Rice/Royalton area.  He served his country in the U.S. Navy during the Vietnam war,
serving three tours of duty. He worked as a supervisor at the paper mill in Sartell for 38 years and also worked for a period of time at Park Industries. He was a member of St. Francis Xavier Church in Sartell and the American Legion Post #277 of Sartell.

Sufka loved to tell stories and was quite the talker. He enjoyed spending time cooking, gardening, playing horse shoes and fishing.  Sufka had a great work ethic and always found time to help out other people, he was one to drop everything and help, he was always generous to others. He was a strong person, a motivator and a good-hearted man.

He was preceded in death by his parents and brother, Nick Jr.