photo by Cori Hilsgen Rick and Melanie Klisch's two-year old twin sons, Gavin and Grant, enjoy checking out the inside of the "old" fire truck.

Hundreds of people attended the Safety Fair Oct. 10 at St. Joseph Community Fire Hall. Many of them brought their families.

The event was popular with many area children. It included free hot dogs, popcorn, cookies, beverages and many other items for children.

Children played on an inflatable slide; checked out the inside of fire trucks, a police car, an ambulance; got fingerprinted and more.

Patricia Rueckert brought her children Dominique, 4, and Michaylah, 1. Because there were so many attendees, they decided to eat outside until it was less busy inside. Dominique and Michaylah were eating hot dogs and cookies.

“It’s great for kids,” Rueckert said. “We’re looking forward to getting back inside to enjoy some of the activities.”

“It’s a great family night for kids to get out,” Rennie said. “It’s nice to see we have this much support from the community for what we do. It’s always a fun day.”

She said between 300-400 people were expected to attend the event. Rennie said many people were asking about the helicopter that was scheduled to arrive at the fair. She said they had recently done a training drill with North Memorial Hospital.

Jakob said he enjoyed going on the inflatable slide and was excited to see the “old” fire truck and the “big” fire truck that were on display. He also got fingerprinted for safety.

“It’s a wonderful community event that engages the community with all aspects of public safety,” Klein said.

“This is wonderful for kids and a great opportunity for parents to learn all about the fire department,” Sanner said. “The kids are having a blast.”

Rick and Melanie Klisch’s 2-year-old twin sons Gavin and Grant enjoyed checking out the inside of the “old” fire truck by climbing on the seat and turning the steering wheel.

Captain Dave Salzer, who has been with the department for nine years, was busy helping at the event.

“It’s great for the public to come and see everything we do,” Salzer said.

Julie Theis and Micale Gillson from Gold Cross Ambulance were busy showing children the inside of an ambulance. Theis said 20 children had climbed in the ambulance during the first 15 minutes they were at the event.

“We’re happy to be included and to see what a nice turnout it is coming to an event like this,” Gillson said.

Kelli Gauthier and her sister, Traci Pollreis, brought Lauren Schelske, 9, Leah Schelske, 5, and Logan Schelske, 2, to the fair. Gauthier said it was the first time they had attended the event.

“It’s been great,” Gauthier said. “The kids are having a blast. They loved climbing in all the equipment.”

photo by Cori Hilsgen
Rick and Melanie Klisch’s two-year old twin sons, Gavin and Grant, enjoy checking out the inside of the “old” fire truck.

photo by Dennis Dalman
Isabelle Neisen gets to sit in a police car at the St. Joseph Fire Department Open House Oct. 10. Neisen, 3, is the daughter of Tim and Kelly Neisen of St. Joseph.

photo by Tara Wiese
Left to right: Isla Bruns, 4, of St. Joseph, Kayla Wiese, 4, daughter of Tara Wiese, Newsleader employee, and Grace Boatz, 4, of St. Joseph appear as a blur from jumping so fast in the inflatables at the St. Joseph Fire Department open house on Oct. 10.

photo by Dennis Dalman
Haylee Peterson of Holdingford smiles, happy with the bagful of goodies she was given at the St. Joseph Fire Department’s Open House Oct. 10.

photo by Cori Hilsgen
Julie Theis from Gold Cross Ambulance strapped in Lauren Schelske, 9, as her family observed the procedure.

photo by Cori Hilsgen
Jakob Schmitz, 8, studied a panel on the “big” fire truck at the safety fair.

photo by Cori Hilsgen
Jory Stenman, 1, is not interested in sharing his cookie with Police Chief Joel Klein. Jory is the son of Elijah and Kari Stenman.

photo by Cori Hilsgen
Diane Muske holds her granddaughter Aubrey, 2, after placing a fire hat on her head. Aubrey is the daughter of Jeff and Christine Dockendorf.

photo by Cori Hilsgen
Patricia Rueckert sits with her children Michaylah,1, (front) and Dominique, 4, while they enjoy hot dogs and cookies at the safety fair. 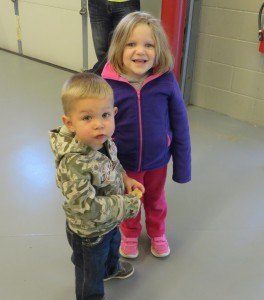 photo by Cori Hilsgen
Cousins Carson Salzer,1, (left) and Sofia Salzer, 4, enjoyed checking out the safety fair. Carson is the son of Dave and Jenny Salzer and Sofia is the daughter of Jeff and Laura Salzer.

photo by Cori Hilsgen
Firefighter Andy Loso holds his daughter Katie, 3, while they wait for the helicopter to arrive.

photo by Cori Hilsgen
Captain Dave Salzer shows his son Jack, 6, where the helicopter is expected to land.

photo by Cori Hilsgen
Wyatt Lemke, 7, (left) and Emmett Lemke, 2, enjoy learning about the inside of a police car at the fair.

photo by Cori Hilsgen
A helicopter from North Memorial arrives about 6 p.m.

photo by Cori Hilsgen
Safety fair attendees were able to climb in and check out two fire trucks.

photo by Cori Hilsgen
A crowd gathered around the helicopter from North Memorial when it arrived.